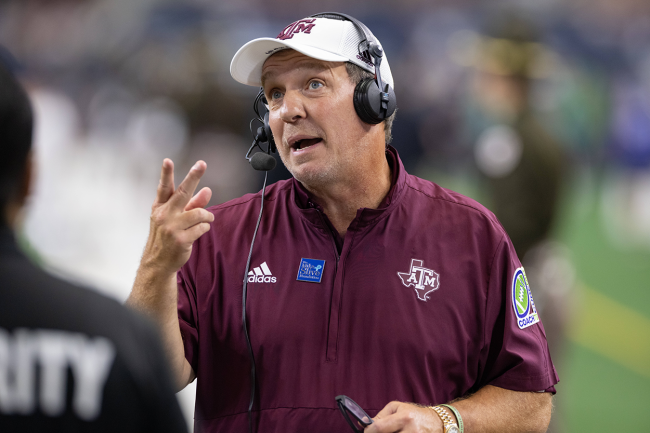 For the first time in a few years, the college football coaching carousel is truly bonkers. Two of the most high-profile coaching jobs in the sport are open at the same time and two expectedly big-name hires are headed to Los Angeles and Baton Rouge.

As rumors and speculation continues to circle around the LSU and USC openings, every name in the phonebook has been thrown around. It certainly seems like James Franklin is headed to one of the two schools — most likely to the Trojans — which leaves just the Tigers.

With names such as Luke Fickell, Mel Tucker, Dabo Swinney, Sonny Dykes, and even Mike Tomlin in the mix, it appears to be wide open. However, one of the notable candidates is reportedly uninterested.

But with that being said, this sounds like one of the more credible claims, and every once in awhile, the message boards get it right. According to one user, who says that he or she spoke with Jimbo Fisher’s immediate family, the current Texas A&M and former Florida State head coach turned down LSU.

Per PlainsmanAU18, Fisher turned down $9 million annually to stay in College Station.

Again, there is not a significant source here. It’s a random guy who claims to have dinner with someone directly related to Fisher.

But his claim makes sense.

Fisher signed a 10-year, $75 million contract when he took over at Texas A&M before the 2018 season. He then signed an extension in September of 2020.

Why would Fisher accept less money over time to take a job with higher expectations and a more impatient fanbase? On top of the pay cut, he would lose all of the momentum he has built with the Aggies.

There is simply no reason, other than the weight that “Louisiana State University” carries, for Fisher to make a lateral move within the SEC at the money he was allegedly offered. For him to say no, while it might seem like a surprise on first glance, is completely logical.

So while PlainsmanAU18 might have no or every idea of what he’s talking about, but what he is saying is logical, so it very well could be true.