Losing Is All A Part Of Jimbo Fisher’s Master Plan To Land Another No. 1 Recruiting Class 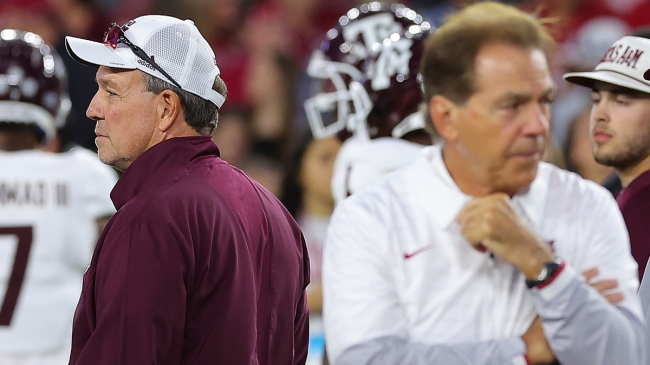 Things have not gone well for Jimbo Fisher in College Station this season. The Aggies are just 3-4 midway through the year despite entering the season with championship aspirations.

Fisher’s team has struggled with a variety of different obstacles, including injuries, offensive production, and off-the-field issues. Those problems have led to losses to Alabama, Mississippi State, and South Carolina over the last three games. The Aggies also fell in embarrassing fashion to Appalachian State after paying the Mountaineers $1.5M to visit College Station.

While things on the field have not gone according to plan in 2022, Fisher has been able to lean on recruiting prowess to keep the support of Aggie Nation. Texas A&M landed not only No. 1 overall class last year, but it was the top cycle in the history of the recruiting services.

Now, many will say the Aggies’ NIL money had a lot to do with that, as boosters were rumored to have spent $25-$30M to score those commitments. That may or may not have contributed to the historic bunch, but it appears the head coach already has a new plan put in place for the 2023 class.

Jimbo Fisher is being trolled for his latest comments on recruiting amid the Aggies’ 3-4 start.

Jimbo was asked about how he’s handling recruiting with the team’s recent struggles on the field, which landed the following reply from Fisher.

“Everybody says, ‘Why go somewhere that’s winning all the time? I may not play for a while.”

A lot to break down from Fisher full response, which you can find here, especially with Jimbo talking a million miles a minute.

The line about playing time vs. historic success is one that’s used often by newer coaches looking to implement a new culture. We’ve seen it work at Arkansas, South Carolina, and Tennessee in the SEC. The issue with Fisher is that this is year number five in College Station and he’s on track for his worst season yet.

Making things worse, the Aggies are having some issues keeping that historic recruiting class out of trouble. A number of true freshmen have been suspended indefinitely for violating team rules, the second such suspension involving A&M rookies this year.

These latest comments haven’t aged well for Fisher with the team on a three-game losing streak. Take a look at what fans had to say on social media.

"Come play for me. You don't need to worry about us winning all the time."

One Twitter user joked about the pitch, saying, “Come play for me. You don’t need to worry about us winning all the time.” Another said the same, commenting, “Who wants to win? Winning is for losers. We may suck, but at least you’ll get to play a lot while losing.”

“Who wants to win? Winning is for Losers. We may suck, but at least you’ll get to play a lot while losing”. Nice sales pitch.

This fan commented on the NIL element, posting, “There actually is magic pixie dust. It’s called NIL and A&M sprinkled that all over the place last year,” to which another person replied, “They sprinkled green pixie dust, but it’s been far from magical.”

Fisher said that relationships are more important than NIL or winning, which seems to counter the results for Jimbo’s most recent cycle.

They sprinkled green pixie dust but it’s been far from magical 😂. All the money in the world and still a crap head coach.

That sales pitch will only work for so long. If Fisher can’t turn things around on the field, the No. 1 classes won’t continue to roll in. Jimbo, himself, talked about the future of a program being important for incoming freshmen. Recruits want to see progress, but the Aggies currently find themselves on a downward trajectory.