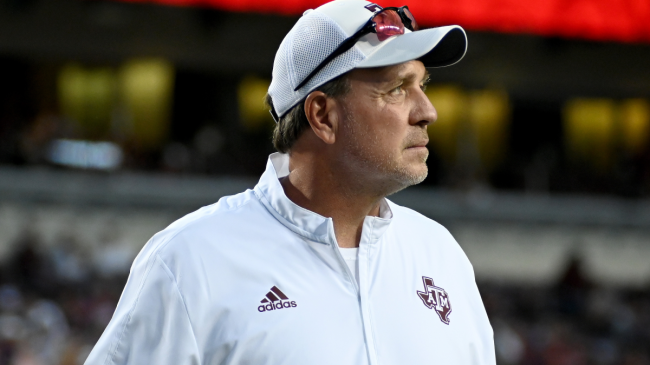 Things continue to go from bad to worse in College Station. The Texas A&M football program finds itself under .500 on the year following their latest loss to South Carolina. While many have already given up on the 2022 season, it appears that recent transgressions could impact the future, too.

The Aggies landed the No. 1 recruiting class in the 2022 cycle. In fact, it was the top-rated class in the history of recruiting rankings. Many questioned the validity of that class, accusing Jimbo Fisher of exploiting NIL to provide pay for play deals. Message board rumors said boosters spent upwards of $30M to land 25 players that were rated as either four- or five-star prospects.

Some more recent rumors, however, insinuate that those alleged payments could be for naught.

Billy Liucci of TexAgs.com posted a message on Twitter claiming that Fisher was handing down indefinite suspensions to multiple Texas A&M players. Those punishments are said to relate directly to the Aggies ’22 recruiting class.

When it rains it pours. I've been told at least three and perhaps four A&M players have been suspended indefinitely by Aggie head coach Jimbo Fisher, all from the true freshman ranks.

Liucci says “three to four” players, all from the freshman ranks, have been suspended. We won’t guess on the players involved, but it’s not the first time that Texas A&M youngsters have run into trouble this season.

That star-studded freshman class has already played a large role in the 2022 season as Texas A&M has dealt with a plethora of injuries at major positions. Last weekend, we got our first look at five-star passer Conner Weigman who entered in replacement of a banged-up Haynes King.

But digging deeper than just this season, the future of that recruiting class is becoming less certain. The transfer portal looms and programs are always in need of talent, regardless of red flags. It also hurts the optics of that once prized cycle, which was expected to be Fisher’s saving grace in College Station.

Should recruiting go south, and the struggles on the field continue, Fisher’s seat could become red hot over the second half of the 2022 season.