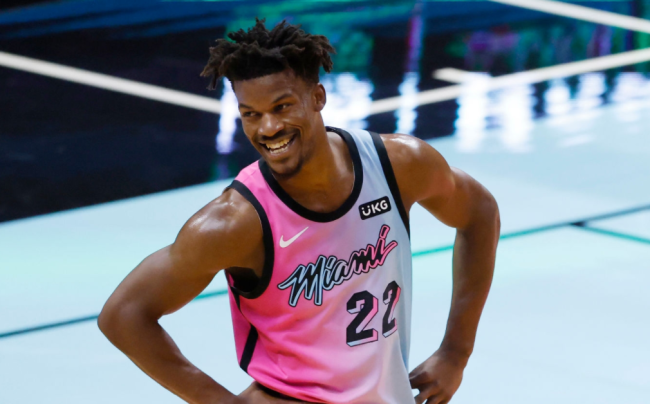 Jimmy Butler scored 26 points and dished out 10 assists during the Heat’s win over the Knicks on Tuesday night, but that wasn’t his best performance.

Miami held a one-point lead with just under five seconds to go in the game when a scramble for a loose ball broke out. The several players on the floor got up after the play, except for Butler. He elected to stay on the floor and catch the attention of the referees. He started rocking back and forth while lying on his back while covering his eyes to really try and sell a foul, only to peak through his fingers to see if the officials were going to award him for his acting job.

Jimmy Butler deserves an Oscar for trying to sell this flagrant foul. 😂

Butler’s antics in hopes of being gifted a flagrant foul didn’t work, however. He simply drew a common foul and hit one of two from the charity stripe before Miami held on to win the game 98-96.

Everyone, including Butler’s teammates, knew Butler was trying to sell the foul with his dramatics on the floor.

“Everybody knew it—that’s why we was all laughing,” Bam Adebayo said postgame. “First of all, if Jimmy’s really injured, he’s not peeking. If Jimmy’s really injured, everybody knows that he’s getting up and trying to walk it off. The fact that he was down there for so long, just being Jimmy, I feel like that’s one of those things over the course of the game that lightens the mood. Everybody gets a mental break from being serious for like 30 seconds, and we lock back in.”

Butler admitted after the game that he was acting out on the floor and said he’s picked up a few pointers from Mark Wahlberg.

“I’ve studied Mark Wahlberg and how he acts so incredibly well,” he told reporters. “I’ve taken a few pointers.”

While there’s noticeably been more complaining, whining, and flopping in the NBA this season, it makes it all a bit more bearable when guys own up to it as Butler did on Tuesday night.