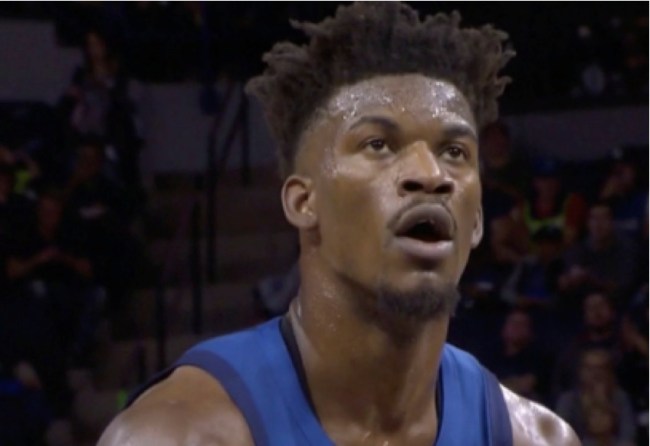 What in the hell is actually happening with the Minnesota Timberwolves and All-Star forward Jimmy Butler? As we’ve reported over the past few weeks or so, the superstar requested a trade during the offseason, started some beef with teammate Andrew Wiggins’ brother on Twitter, called a players only meeting a day after whooping the starters’ asses with some scrubs, and, well it’s absolutely a F’in shitstorm of a situation — according to T-Wolves great Kevin Garnett.

With no one really understanding what’s going on, Minnesota fans appear to be divided as to how to react to Jimmy Butler. At least, that was the case tonight during the team’s home opener against the Cleveland Cavaliers, when fans raucously booed Butler’s ass during pregame intros.

Jimmy Butler met with boos in Minnesota during intro pic.twitter.com/n2m9y44H1V

The reaction as Jimmy Butler is introduced for the first time at Target Center….. pic.twitter.com/CN3ATUMqjI

Man, talk about a shot to a guy’s ego, right? Well, that kind of hate didn’t seem to last too long, because, by midway through the second quarter, those same T-Wolves fans had already forgiven Butler, as some were heard chanting “M-V-P” while the dude was shooting free throws.

Jimmy Butler (booed in intro) is getting MVP chants at the line.

Sports is full of bipolar behavior like this, when, in a matter of minutes, a player can go from the worst goat ever to a legedary hero. Given Jimmy Butler has called out teammates and the Timberwolves’ front office, I’ve got a feeling things are continue to be pretty awkward until there’s a resolution. But, hey, this is just another reason why sports is so great, because fans can go from hate to love in a mere 20 minutes.

I’ve said it before and I’ll say it again; this Jimmy Butler drama with the Timberwolves has a better plot twist than any movie I’ve seen in a long time. So, sure, it’s dysfunctional as hell, but I kind of hope it continues throughout the season, because it really is must-see TV at this point.