Jimmy Garoppolo’s Trade Value Is Taking A Big Hit For One Specific Reason, According To NFL Insider 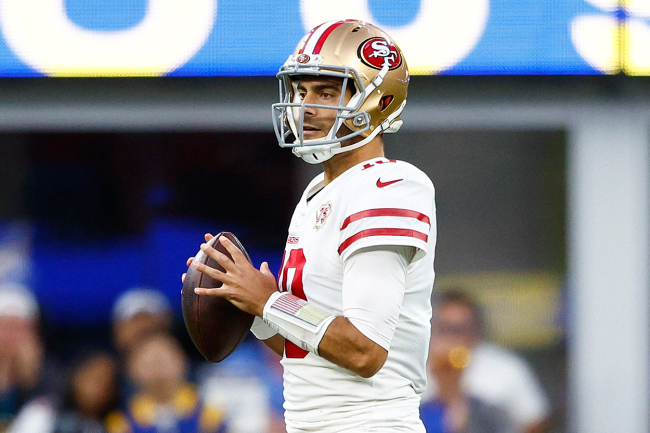 Jimmy Garoppolo’s future in San Francisco is unclear. The 30-year-old quarterback is currently the incumbent starter for the 49ers, but he is set to cost the team a large amount of money in 2022 and Trey Lance is waiting in the wings.

As a result, Garoppolo is on the market. San Francisco is open for business and the organization is willing to trade their five-year starter. But there is one problem…

There is not a team that wants to trade for Garoppolo at the moment which leaves one of two decisions to be made. If the 49ers cannot trade Garoppolo, they must either cut him and save the salary cap hit, or keep him around and have him compete against Lance.

Ideally, San Francisco could trade him. However, according to NFL insider Albert Breer, the market is nonexistent for one sole reason.

Garoppolo had surgery on his shoulder during the offseason which is leaving doubts around the league and took a big hit to his value.

Breer recently spoke about Garoppolo’s trade value on The Rich Eisen show. Here is what he had to say:

“I really do think Jimmy would have a starting job right now if it hadn’t been for the shoulder surgery. I think somebody would have taken that swing on him. I think the issue you have now with Jimmy, because of the shoulder issue, is, can you count on him to be what he’s been the last few years when you get to September and October?”

And because he’s only under contract for one more year. You’re, by definition, acquiring him for 2022. So, you’re Carolina, right? Like people’s jobs are on the line in Carolina … Do you trade for Jimmy, knowing he’s going to miss the entire spring? He’s not going to be throwing again until late June, early July, you know?”

“And even then, you may think that he’s going to be okay, but that’s sort of an unpredictable thing. Is he going to be full-go come training camp? And you’re trying to put in a new offense, right, like with Ben McAdoo there.”

Breer then continued to explain why teams are so hesitant on Garoppolo.

“So, there are all these things that, sort of, the shoulder complicates. And you know, if everybody’s fighting for their job, then it becomes a little bit more difficult to kind of wrap your head around the idea of really going all-in on somebody like Jimmy.”

And so, I think, with Jimmy, it’s really more than anything else the shoulder that’s complicated things. I do think that there are teams out there that look at Jimmy and say, ‘That guy could be a really good starting quarterback for us, if healthy.’ The problem is, he’s not healthy right now.”

Assuming that Breer is correct, it sounds like Garoppolo is staying put. At that point it is up to the 49ers whether to cut him loose.