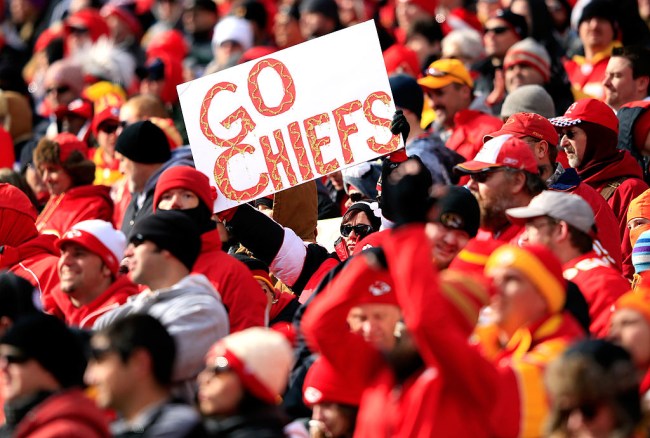 I like to think I’m a pretty rational person but my supposed levelheadedness goes out the window and plummets to the ground harder than the toilet in The Boondock Saints when it comes to watching sports.

I’m well aware that putting on a certain jersey or posting up on the “lucky” side of my couch has no tangible impact on the action that transpires during whatever game I’m watching and know that yelling at my television isn’t going to have a direct impact on the final result regardless of how much I abuse my vocal cords.

With that said, I also buy pretty hard into the butterfly effect, and while there’s no way to prove my actions manage to send a ripple through the universe that eventually impacts a certain outcome, you also can’t prove they don’t.

It would appear a Kansas City Chiefs fan named Charles Penn also buys into the idea that a seemingly insignificant change can have an impact on the cosmic energy of the universe. On Sunday, he left Arrowhead Stadium early with his team trailing the Texans by 21 points at the end of the first quarter and recorded a video explaining his reasoning.

The Chiefs mounted a comeback almost as soon as Penn and his bad juju departed and his video quickly started to make the rounds online as they steadily rolled to an eventual victory.

According to ESPN, Penn had a rocky track record when it came to the playoff games he’d previously attended on Kansas City’s home turf, as they’d dropped the previous three contests he was in the stands for.

As a result, he figured he’d sacrifice the $258 he dropped on his ticket for the greater good and it seemed to work out pretty well (Penn says he actually ended up making even more money back after grateful fans offered to hit up his Venmo).

After the game, Mahomes was asked to share his thoughts on Penn’s early exit and joked that he should stay home for the AFC Championship game.

Appreciate you doing what was best for the Kingdom! 😂😂😂

He might have been kidding but Penn says he’ll be taking Mahomes’ advice to heart and watching the showdown from the safety of his own home. Sure, it might sound crazy, but it’s only crazy if it doesn’t work.