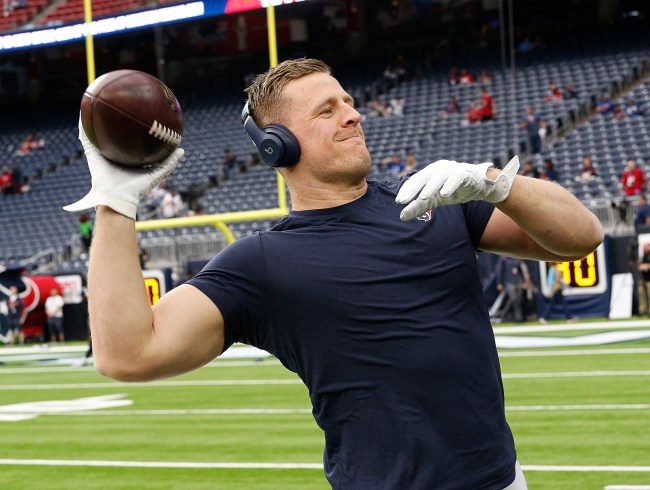 JJ Watt seems like he’s a good sport, doesn’t he? Whether it’s surprising his old fourth grade teacher at her retirement party once, or raising millions of dollars for hurricane relief for the city of Houston a couple of years ago, the All-Pro defender sure is a stand up kind of guy. Well, Watt’s at it again, proving that he’s Mr. Nice Guy, because he just made some elementary kid’s day with his most recent act.

After a teacher tweeted out the elementary kid’s project — which was a fictional product called “Energy Chips”, which has 50% less sugar, but still keeps people energized all day long — JJ Watt, who was chosen as the celebrity endorser for the fake product by the elementary kid, didn’t just reply with a couple words. Oh no, he took things to the next level, because he actually recorded a fake endorsement video to promote the fictional potato chips, even getting his teammate Will Fuller involved. Take a look at the entire interaction on Twitter below, which includes Watt’s hilarious (and awesome) video.

@JJWatt my class created products and had to use a advertising technique, one of my students chose celebrity endorsement…and look who he chose!! Thanks for being such a great role model for our future!!! pic.twitter.com/b7xBtMM7vt

Haha that’s awesome. Had a couple extra minutes during lunch break today, so I figured maybe this would help boost his grade on the project. I also brought on a second endorser, but we need to work on his script a bit 😂😂 https://t.co/Di7LUZd3a5 pic.twitter.com/StAPmIbcfS

Welp, it’s official, JJ Watt’s out here making every other guy look like a chump with all the dope stuff he does — ’cause you know the elementary kid just got bragging rights over his entire class after this. Plus, it looks as if Watt’s video helped score the kid a higher grade, so maybe this little dude has a future in advertising in a few years.

@CryarCats yes, definitely have to give an A on this project!!! You made our day and one student extremely excited and also many teachers!!! Thanks again for doing so much for the future generations!!! https://t.co/OyvOGTstY8

From tossing a football back and forth with fans in the stands before every game to doing a ton of extra stuff to influence and inspire other people off the field, there aren’t many athletes out there like JJ Watt, so it’s totally cool when stuff like this happens. And, hey, who knows, maybe these “Energy Chips” become a real thing one day.