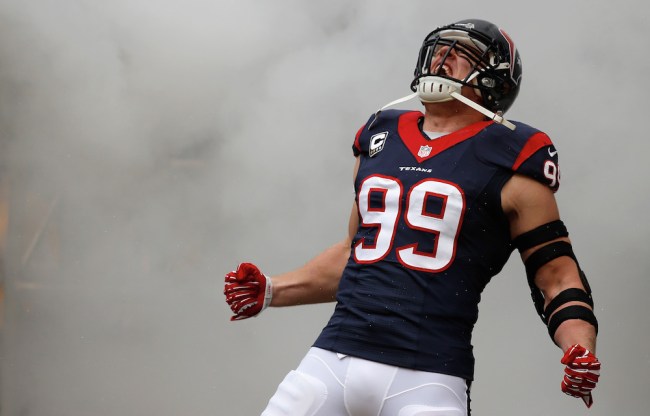 J.J. Watt is one of the faces of the NFL.

The Texans star is beloved in his community, raises money for local food banks in Houston, and carries himself well on and off the field.

Watt is also incredibly honest when it comes to issues around the league. Watt wasn’t afraid to plant his flag on the kneeling issue, so it should come as no surprise that Watt is willing to speak his mind on the new rules the NFL is considering for the coming season.

There’s one safety measure, however, that the league is considering that Watt just won’t stand for and it involves the gear players might be forced to wear.

During an interview with Pro Football Talk, Watt made it clear that sitting out the 2020 season would be an option if he’s forced to wear a protective face shield.

His stance has nothing to do with personal freedom or a political stance – Watt just hates playing in a face cover.

“My second year in the league I thought it’d be cool, I put a visor on my helmet,” Watt said during a Wednesday visit to #PFTPM. “I was like, ‘It looks so cool, I wanna put a visor on.’ I had it on for about three periods of practice and I said, ‘Take this sucker off I’m gonna die out here.’ . . . So now you’re gonna put something around my mouth? You can keep that. If that comes into play, I don’t think you’re gonna see me on the field.”

With less than two months until the season starts, the NFL and the NFLPA are hammering out specifics for the safety protocols implemented to protect players. Face shields could be one of those safety measures.

The NFL spent much of the offseason testing different types of protective masks but no official statements have been made on the issue.

Watt did add that it’s still too early for players to decide whether to sit out the season but the NFL is expected to give all players the option of sitting out the season.

In the meantime, Watt is definitely in shape for the season, posting this selfie on Instagram and looking shredded as hell.