Video Of T.J. Watt Shoveling Snow Off J.J. Watt’s Front Entrance Made Everyone On Twitter Say The Same Joke 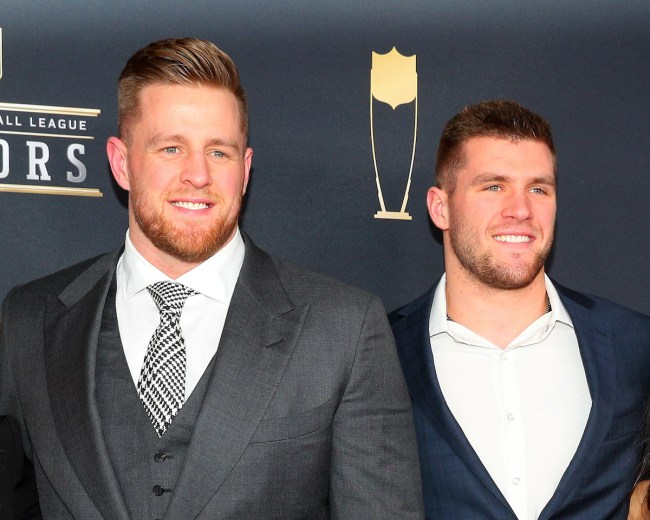 If you haven’t noticed, J.J. Watt’s free agency this NFL offseason has driven fans to the brink of psychopaths. From stories about his interest in the Cleveland Browns — which has me salivating as a Brownies fan — to people tracking his whereabouts on social media, everyone’s wondering where the three-time Defensive Player of the Year may land.

Of course, one of the teams linked to J.J. Watt is the Pittsburgh Steelers. Forget the fact that the team is drowning in cap space or that future Hall of Fame quarterback Ben Roethlisberger was told by a team executive to either “retire or restructure” given his personal cap hit, what’s really making the Steelers an option for J.J. is two things: Brothers T.J. Watt and Derek Watt, who both play for the Black & Yellow.

Now, considering all eyes are on J.J. Watt’s free agency at the moment, people on Twitter are freaking out a bit after seeing T.J. shoveling snow from the front entrance of his brother’s house. Take a look below.

Normally, not a big deal. But, then again, most normal families don’t have three boys playing in the NFL with the opportunity that one, J.J. Watt, controls his own destiny and could join the two others on the Steelers. So the video of T.J. working hard shoveling snow certainly caused a range of emotions from the folks on Twitter, who all took it as a free agency pitch from the Pro Bowl defender.

Yea. He shoveling the driveway so you can get to heins field and play with him pic.twitter.com/QHhjcd7MCa

The recruiting is going to new levels @_TJWatt

TJ offering to help shovel the snow like pic.twitter.com/k8sZT4KgXu

TJ:”If I shovel your driveway will you sign with the Steelers?”

JJ to the Steelers #confirmed

Obviously, this probably means nothing in the grand scheme of things, but, hey, when it comes to the NFL offseason, even a younger brother shoveling an older brother’s front entrance may be the real selling point. Imagine if J.J. Watt — who admitted that free agency is wild — told brothers T.J. and Derek that he’d sign with the Steelers if one or both of them promise to shovel his driveway and do his landscaping the entire time he plays for the franchise? That sounds like a pretty awesome deal to me.

Who knows how the hell J.J. Watt’s free agency will end up, but plenty of teams are inquiring about the 32-year-old. And, even if T.J. shoveling his walkway doesn’t do the trick to get him to Pittsburgh, at the very least, J.J. has a clear front entrance.