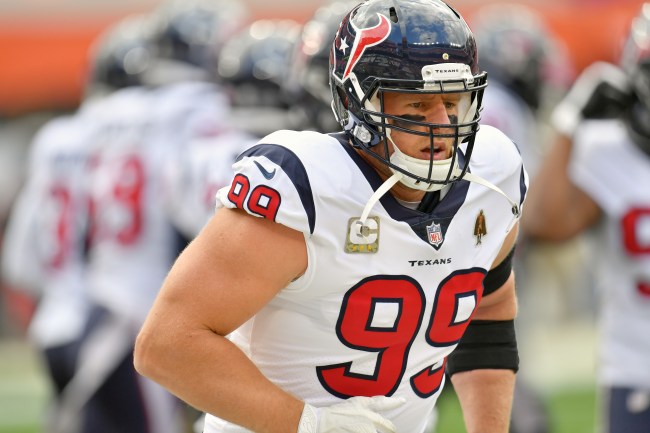 It appears that J.J. Watt could be headed to Cleveland.

On Tuesday morning, Cleveland.com’s Mary Kay Cabot reported that Watt is “seriously considering” playing for the Browns because they are one of the few teams with plenty of cap space to make a deal and he also believes that he can compete for a Super Bowl there.

Ex-#Texans J.J. Watt is seriously considering the #Browns as one of his options because they have a lot of what he wants, sources tell clevelanddotcom https://t.co/8YITdBpPTJ

NFL Coach of the Year Kevin Stefanski just might find himself with a three-time NFL Defensive Player of the Year in J.J. Watt on his roster this season.

Released by the Texans on Friday, Watt is seriously considering the Browns as one of his options because they have a lot of what he wants, sources tell cleveland.com.

The two biggest things? Money and a potential Super Bowl. What’s more, they have a strong supporting cast and a positive environment. Check, check, check, and check.

According to ESPN’s Ed Werder up to a dozen, teams are interested in Watt’s services this offseason but it’s unclear how serious they are about signing him.

NFL sources: Approximately a dozen teams have shown interest in JJ Watt since he became an immediate unrestricted free agent. Included among those teams are the #Steelers, #Browns, #Bills and #Titans.

One NFL personnel director on JJ Watt: “Hard to place value because new cap not out. Good player could play in any scheme. Age and injury history have to be accounted for.” More opinions coming up in my report on @SportsCenter

QBs in the AFC will definitely have nightmares dealing with Watt and Myles Garrett if Cleveland pulls the trigger and signs the defensive superstar.