Packers Fans Are Freaking Out Because They Believe J.J. Watt Is On A Private Plane Headed To Green Bay 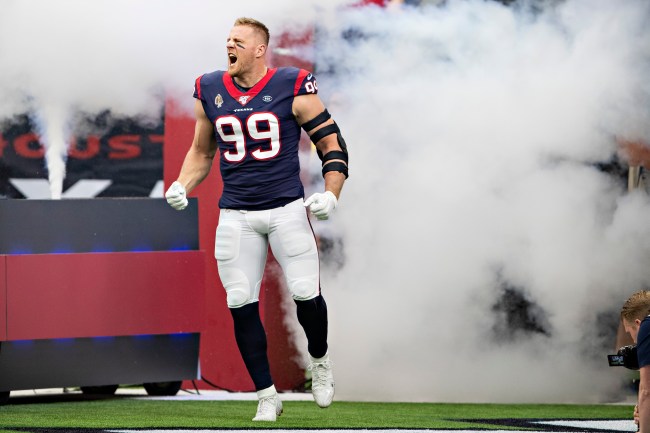 We’re at the point of the NFL offseason where fans are tracking planes that may or may not be carrying potential free agents for team visits.

Last week, JJ Watt announced that he and the Texans were parting ways. Since then nearly a dozen teams have reportedly shown interest in acquiring the veteran defensive end.

According to ESPN’s Dan Grazian, the Green Bay Packers are the current favorites to land Watt this offseason because he’s from Wisconsin and the team can probably afford him.

“A lot of teams called but he’ll narrow down the list,” Graziano said. “The first place your mind goes, and the first place JJ Watt’s mind goes is to Pittsburgh where both of his brothers play. TJ is obviously the star pass rusher for the Steelers and Derek Watt plays fullback for them, so the idea of playing with both of his brothers obviously is intriguing for JJ Watt. There’s no question about it. His priority, I’m told, is that he wants to go somewhere to win. And obviously Pittsburgh is considered a winning organization, has been for a long time.

“But with that salary cap, they may not be able to afford him. The second place your mind goes is to Green Bay because JJ Watt is from Wisconsin. Green Bay is a team that’s won 13 games each of the last two years, played in two-straight NFC Championship games.

“Those are the two most prominent possibilities at this point for JJ Watt, with Green Bay probably having the edge for financial reasons.”

On Wednesday, Packers fans were convinced Watt was on a private plane headed to Green Bay.

Breaking: A Learjet from Waukesha just landed in Green Bay. JJ’s insta yesterday showed he was at nx level in Waukesha. Could it be him??? #JJWatt @jasonjwilde @AaronNagler @cheeseheadtv pic.twitter.com/dbYKx5vok5

This photo was taken in the NX Level Sports Performance in Waukesha Wisconsin. pic.twitter.com/m7UgWAXRjw

Yeah, I’ll bite. I like to get excited about stuff. https://t.co/cNM5dxxRD7

Lol this is practically stalking but I’m here for it !!! https://t.co/j1iDlsrvmI

Am I getting to excited over this? Yes. But, who the hell just flys from Waukesha to Green Bay? This can’t be a coincidence https://t.co/2HvX600Hgk