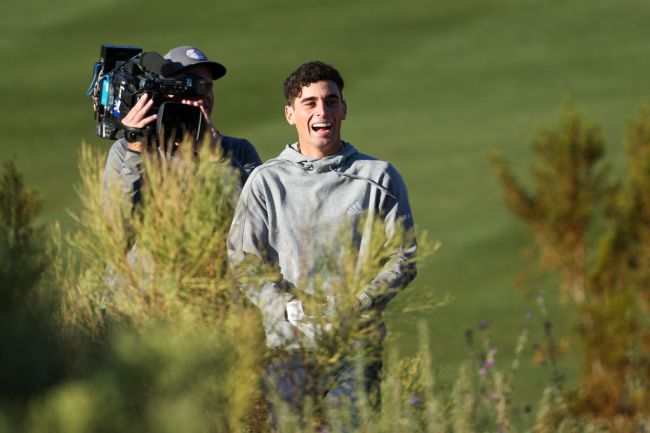 Believe it or not, but you, me, and every other person that’s ever played a round of golf has been where Joaquin Niemann – the No. 30 ranked player in the world – was off the first tee at the CJ Cup on Friday. It’s what happened after his first shot of the day where he separates himself from the rest of us normal folk.

Niemann blocked his opening tee shot way, way right and his ball found the cart path and bounced into the desert at The Summit Club. He then elected to take an unplayable after somehow finding his ball.

This left him with a short-sided, 62-yard wedge from the adjacent fairway. He had absolutely no sight of the flag whatsoever but threw his shot way into the air, the ball took two bounces, and dropped into the bottom of the cup.

Just your routine birdie. A blocked tee shot out of play, an unplayable, and a hole out.

Niemann’s reaction is great, too. He simply could not believe that he holed out from no man’s land. Shoutout to him for flawlessly executing his high five with his caddie, too, most players would’ve screwed that exchange up in the moment, but not Mr. Niemann.

Related: Joaquin Niemann Raises Over $2 Million To Help Save His Cousin’s Life