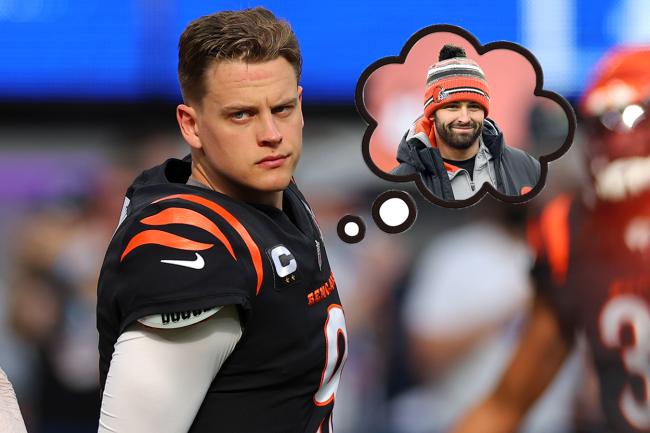 Joe Burrow has been in the NFL for two seasons. He missed part of his rookie year with a torn ACL but came roaring back in 2021 to lead the Bengals to Super Bowl LVI.

Just a few hours up the road, Baker Mayfield did not have the same success. The Browns missed out on the playoffs after going 8-9, Mayfield struggled with injuries, and the team quickly decided to move on at the end of the season.

After the former Heisman Trophy winner’s fourth year in the NFL, Cleveland chose to pursue a trade for Deshaun Watson, which upset Mayfield. And then the team actually made the deal happen, acquiring the former Texans quarterback for a rather large haul and paying him a small fortune upon arrival.

This coming weekend, Watson is bringing the vast majority of the Browns’ offense on a trip to the Bahamas that will run him a large tab. Mayfield will not be on the trip as he continues to recover from his ailments and continues to express his desire to be traded.

It’s been a tough stretch for Mayfield, but Burrow is confident that he will land on his feet. During a recent appearance on the Full Send Podcast, the Bengals wonder boy spoke about his AFC North counterpart.

Over the course of Burrow’s two-year career, he has not beaten the Browns because Mayfield balled out each time they played.

“That’s a tough situation. He was hurt all last year. Every time we play him, he balls,” Burrow said. “First time we played him — Thursday night during Week 2 of my rookie year — we lost like 34-30. The next time we played them, I throw for 400 yards. He goes like 25-for-28 with five touchdowns. He went on a two-minute drive, touchdown, they won the game.”

Burrow also admitted that it’s hard to turn down an opportunity to acquire a player like Watson and understands why the team moved forward with that trade. He also thinks that Mayfield will be just fine wherever he ends up.

“I think when you have a guy like Deshaun [Watson], you gotta take a chance at that because he’s such a great player,” Burrow said. “But Baker will land on his feet. He’s a really good player.”

Burrow answered the question as well as he could have. He did not throw any disrespect on either quarterback and kept things very neutral, while also expressing his belief that Mayfield is better than his current reputation may give him credit for.

Joe Burrow shares his thoughts on the Baker Mayfield situation in Cleveland 🗣 pic.twitter.com/4gF4vJ7jR9