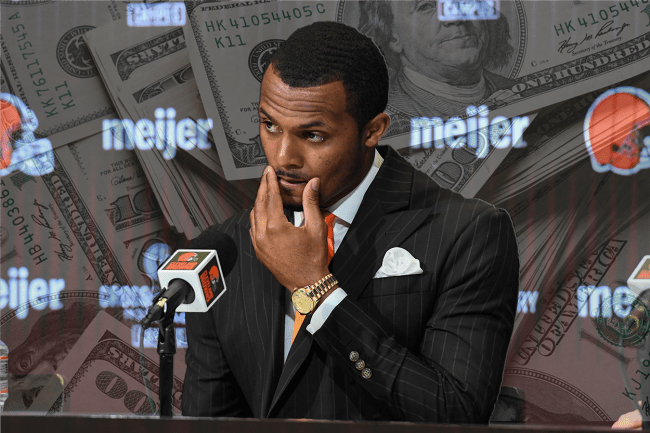 Money is no object to Deshaun Watson and he is making that very clear with his upcoming trip to the Bahamas. The first-year Cleveland Browns quarterback is bank-rolling a Nassau getaway for about 30 of his offensive teammates this weekend and it’s going to be expensive.

Watson, of course, was traded out of Houston during the offseason. Upon being dealt, the 26-year-old signed a massive contract extension that makes him one of the highest-paid quarterbacks in the NFL.

Now he is using some of that money to fly his teammates out to the Caribbean.

According to a report from Mary Kay Cabot of Cleveland.com, at least 27 players will be on the trip and there are others trying to get their passports in time to travel. It includes offensive lineman and skill players.

To get two and from the island, Watson chartered a private jet. That alone is a large bill, especially in the current economy of fuel prices.

Upon arrival, per Cabot, Watson booked a block of rooms at a “luxury resort” in Nassau and is footing the entire bill. Multiple reports have confirmed that they are staying at the Atlantis Resort, which averages at least $315 a night, so about $1,000 per room for the weekend.

And then multiply that by however many rooms are necessary to house 30ish players.

The trip is set to include on-field workouts each day, as well as private group breakfasts and dinners. Factoring (at least) six meals (and presumably drinks) for 30ish players into the bill is also rather costly.

Again, money is not an issue for Watson. He is shelling out the big bucks to try and get acclimated with his new teammates.

This trip is shaping up to cost Watson a small fortune when it’s all said and done. But there isn’t a price tag that can be placed on team chemistry.