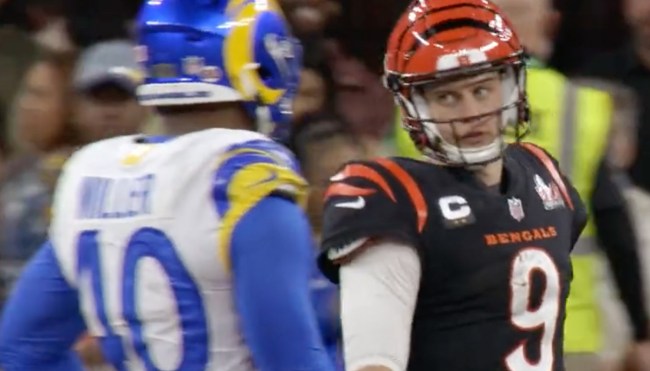 It’s been a couple of years since Joe Burrow first popped up on the radar of most football fans after leading LSU to a national championship a few weeks after securing the Heisman Trophy, and it came as no surprise the highly-touted quarterback was selected by the Bengals with the first pick in the 2020 Draft.

It didn’t take long for Burrow to prove Cincinnati made a very good call, as he bounced back from the ACL injury that sidelined him for the second half of his rookie year and helped take the team to the Super Bowl for the first time since 1988.

Based on what he’s been able to achieve over the course of just a few seasons, you’d be hard-pressed to find many people who don’t know who Burrow is—and when you consider he’s established himself as one of the NFL’s most promising young talents, it’s pretty safe to assume everyone playing in the league is very familiar with the QB.

That includes the members of the Rams defense who spent the weeks leading up to The Big Game formulating their ultimately successful plan to mitigate the amount of damage he was able to do. However, Burrow still went out of his way to formally introduce himself by name to foes including Von Miller and Eric Weddle in a pretty hilarious clip that went viral on Wednesday.

Burrow had to introduce himself to @VonMiller and the Rams D 🤝 pic.twitter.com/rtnv6UVwUM

Burrow has already drawn plenty of comparisons to Tom Brady, and it would appear he and the legendary QB share a similar trait, as the G.O.A.T. also had a habit of introducing himself as “Tom” to new teammates despite needing absolutely zero introduction.

Just guys being gentlemen. What’s better than this>