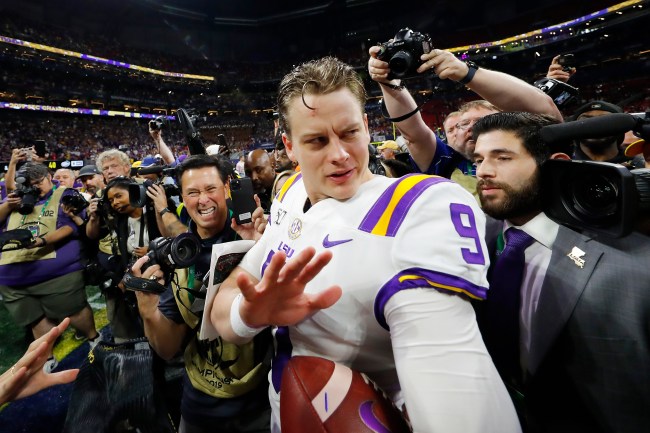 LSU quarterback Joe Burrow is the overwhelming favorite to win the 2019 Heisman Award. His odds to win the award are -2500 right now compared to +1200 for Ohio State’s Justin Fields, +2000 for OSU’s Chase Young, and +2500 of Oklahoma’s Jalen Hurts according to OddsShark. Elsewhere, 247Sports has Joe Burrow‘s odds of winning the Heisman at -50000 and the rest of the field at +3000. That’s a virtual lock.

By now, most people know how Joe Burrow ended up where he is today. After winning the ‘Ohio Mr. Football Award’ and Ohio’s ‘Gatorade Player of the Year’ Award he went on to THE Ohio State University in 2015 where he redshirted for a year and then spent two years as a backup to J.T. Barrett where he only appeared in 10 games for a combined 29 for 39, 287 yards, and 2 TDs.

Once it became clear that Dwayne Haskins would be the next starting quarterback at OSU, Joe Burrow transferred to LSU in May 2018. He’d already graduated from tOSO in just three years and was immediately eligible as a graduate transfer at LSU. Flash forward to this season and the #1 ranked LSU Tigers are heading into the College Football Playoffs. The Louisiana State University Tigers will face #4 Oklahoma in the Chick-fil-A Peach Bowl in Atlanta.

Prior to beating Georgia in the SEC Championship on Saturday, Joe Burrow appeared on ESPN’s GameDay where he spoke with Tom Rinaldi. In that interview, he discussed how it was actually Nebraska and not tOSU that was his first choice but he claims he was told he wasn’t good enough for the Cornhuskers.

"I wanted to go to Nebraska but they told me I wasn't good enough."

He also spoke with Tom Rinaldi on LSU’s preseason perception, how that perception changed after LSU beat Alabama, and on what his expectations at tOSU were. It’s interesting to hear him discuss his time at Ohio State and how that transfer panned out.

On expectation when he enrolled at Ohio State…

“They obviously had a loaded quarterback room. Braxton Miller, JT Barrett, Cardale Jones. I’ll sit for two years. JT will leave for the NFL, and then I’ll have a great career. That’s just not how it worked out.”

On who he told first about transferring…

It’s wild how much pressure is on people to NEVER EVER EVER make major life changes. The pressure against him leaving was IMMENSE. Just like it is anytime any start athlete wants to make a change in the NCAA or in pro sports. And just like it is anytime someone in the regular world wants to leave their job for something else. There’s always pressure to stay and keep things at the status quo.

The 2019 Heisman Award Ceremony is this Saturday (December 14, 2019) at the PlayStation Theater in NYC’s Times Square. Burrow is saying ALL the right (right = humble) things leading up to the awards ceremony and it will be a shocker if he doesn’t win this year.

If you want to see all of his comments from that GameDay segment you can click here to head on over to 247 sports.