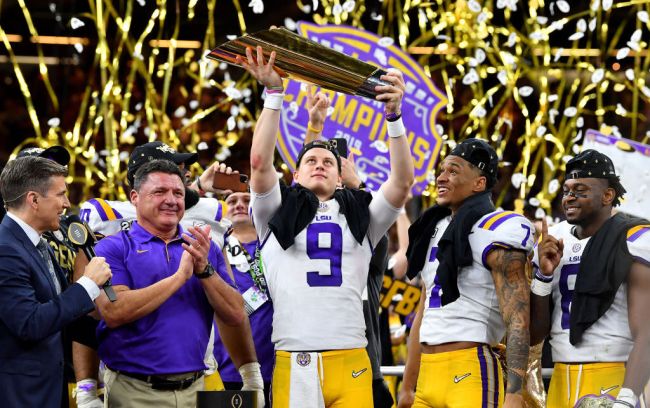 After taking a step away from the limelight following the Cincinnati Bengals’ Super Bowl loss to the Los Angeles Rams, gun-slinging signal-caller Joe Burrow began speaking to the media again last week and has dropped tons of tasty news nuggets along the way.

While we’ve already brought you the story of Burrow admitting he wanted to throw to stud wideout Ja’marr Chase on the key Super Bowl-deciding 4th-and-1 and warning NFL teams that they “don’t want to talk s–t” to him, this latest story may be the most interesting yet.

According to Burrow, following the LSU Tigers’ National Championship victory over Clemson, police attempted to arrest some of the players in the locker room for smoking cigars. Not weed, not crack — cigars.

“We were gonna smoke all the cigars in the locker room. And we started smoking them and the cops come in because I guess you’re not allowed to smoke inside or whatever,” Burrow said on the Full Send podcast. “They started trying to arrest people in the locker room after we won the national title. We’re like, ‘What’s going? C’mon.’ This was in Louisiana. We played in New Orleans for the national title. They were trying to arrest us.”

The cigar incident isn’t the only activity to attract the attention of the law that not, as former LSU wideout Odell Beckham Jr. literally had a warrant for his arrest issued after he was seen on video smacking a police officer on the rear. Beckham also found himself in some hot water for handing out cash to the LSU players, too.