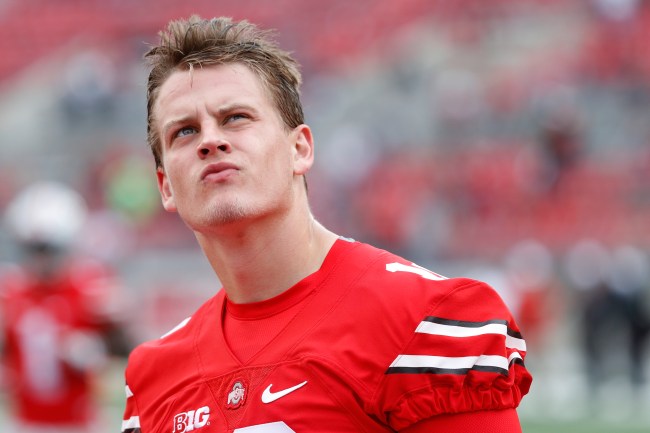 Joe Burrow is a bona fide Heisman Trophy candidate now that he’s in his second season under center for the LSU Tigers. While the quarterback has proven himself to have a big arm, a little bit of swagger — anyone else remember Burrow chirping and waving to Texas fans during a win earlier this season? — and lots of moxie, the dude had to work extra hard and go a longer route to put himself in the position he’s currently in.

An Ohio native, Joe Burrow was ranked as a top-300 prospect in the class of 2015, per 247 Sports, and had offers from big-time programs. But, hailing from the Buckeye state, the signal-caller decided to sign with the Ohio State Buckeyes, hoping he could become the quarterback of the future, winning national titles under the tutelage of then head coach Urban Meyer.

Unfortunately, that didn’t exactly go as planned, as Burrow found himself stuck behind talented guys at his position like J.T. Barrett and Dwayne Haskins in 2016 and 2017, leaving him as the odd man out in the quarterback room. That led to Burrow transferring to the LSU Tigers prior to the 2018 campaign, where he started and showed some solid skills.

Fast-forward to 2019 and Joe Burrow looks like the stud he was touted as before college, so it sort of worked out in the end.

However, considering he played for one of the most prestigious college football programs ever, Ohio State, under the guidance of an offensive guru and all-time head coach, Urban Meyer, he was asked about how his time there helped mold him for the player he is today.

Speaking to reporters, Burrow detailed some of the motivational tactics that Meyer would use on Burrow and the other Buckeye passers, saying that the coach would toss out insults left and right to try and mimic scenarios they may experience in hostile environments. This even included Meyer saying Burrow threw “like a girl.”

Of course, it appears Meyer’s insults had some positive effect. Brody Miller of The Athletic previously reported on Meyer’s insults, noting they motivated Burrow to find noted quarterback guru Tom House, who helped the signal-caller improve his arm strength.

“It completely changed the way I threw the ball,” Burrow said.

Sure, the motivational tactics might have been a little sophomoric and outdated, but they’re things coaches have used in the past, so Meyer was using them to try and rattle his players. In Joe Burrow’s situation, it ended up helping more than he may have thought back then when hearing the insults, and now he’s positioned himself as a Heisman Trophy candidate who has a chance to lead his team to the College Football Playoff — so he probably isn’t too upset with the route he had to take.