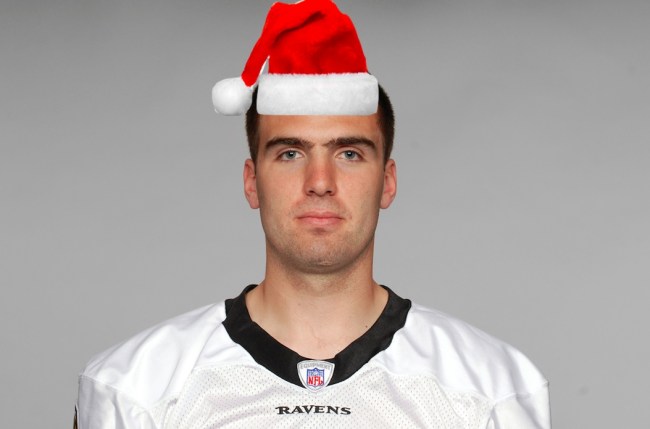 It’s 3 pm on a Wednesday and this is your daily reminder that Joe Flacco is one weird motherf*cker.

I’m not sure if I should use that term literally seeing as Flacco did spend his first two offseasons in the NFL sleeping under mommy’s roof. Ok, that was mean. This Christmas shopping stress has me playing drums in the garage when the wife goes to bed.

Flacco has been my bitter AFC rival for over a decade and I think him living with his parents while working as a starting quarterback in the NFL is the only thing I know about him. Literally couldn’t provide you with one other character trait.

Oh never mind yes I can: he’s not only a weird guy, but a super weird gift-giver.

QUIZ TIME: Last season as a backup for the Ravens, what did Mr. Flacco gift to every one of his offensive lineman.

When in doubt, always guess C, bro. Oh I blew it in the headline? Classic.

Flacco spent $2,000 a POP on restaurant-grade slushy machines, the Ravens reported at the time.

Dude the last time I had a slushy, I went blind for 12 seconds. The human body is not built to withstand all that sugar. Not sure why Joe didn’t pay to inject pixie stick dust in their veins.

For 2G’s, Flacco could have gifted his linemen used jetskis or 43 30-minute massages at The Orchids of Asia Day Spa. Instead he opted to gift them Type II diabetes.

Early in Joe’s career, 2012, his offensive linemen was trying to come up with a Christmas gift idea for him. They asked him what he does in his time off and he responded:

“I hang out in my basement.”

He was gifted a pinball machine that year.