Joe Montana Admits Tom Brady Is The GOAT, Shares Some Advice For The 7-Time Champ 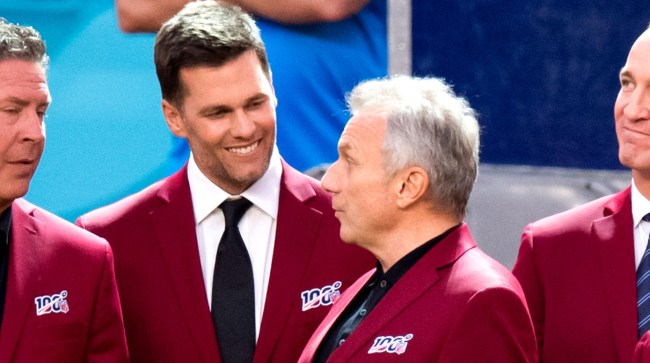 Growing up near the Bay Area, Tom Brady was a huge fan of San Francisco 49ers quarterback Joe Montana, who for the longest time was considered by many NFL fans to be the greatest quarterback of all time.

There was good reason for that since Montana went 4-0 in Super Bowls, winning three Super Bowl MVP Awards, two NFL MVP Awards and passing for more than 40,000 yards in his illustrious career.

All of which makes Tom Brady’s numbers look like someone used create-a-player in a video game: sevn Super Bowl victories, five Super Bowl MVP Awards, three NFL MVP Awards, and 79,204 yards passing. (And he is not even done playing yet.)

Taking all of that into consideration, even Brady’s idol Montana has been forced to admit that TB12 is the GOAT.

Appearing on First Take on Wednesday, Montana admitted, “Oh, I think Tom has taken his place on the top up there a long time ago. He’s had a tremendous career, he’s fun to watch … I think if you look at what Tom’s been able to accomplish in the time he’s played I think it definitely puts him up there on the top of the list.”

Montana also spoke to Fox News on Wednesday, and again the topic of Tom Brady came up, leading to Joe Cool offering the 43-year-old GOAT some career advice.

“Play as long as you can,” Montana advised. “Because once it’s over, it’s over. And if you try to get back to it after you retire especially at a later age, it’s hard to get that motivation back again. So, as long as you can keep it going, and if people want you to play, keep playing.”

Montana added that Brady’s NFL career has “been great for football,” but did offer up one difference between him and the Buccaneers quarterback.

“I don’t know if I would have thrown the [Lombardi] trophy to another boat or not,” said Montana. “Who knows? I guess tequila will make you do something crazy. But he’s been fun to watch.”

What’s your take on this? Brady is the GOAT, right? Let us know in the comments below!