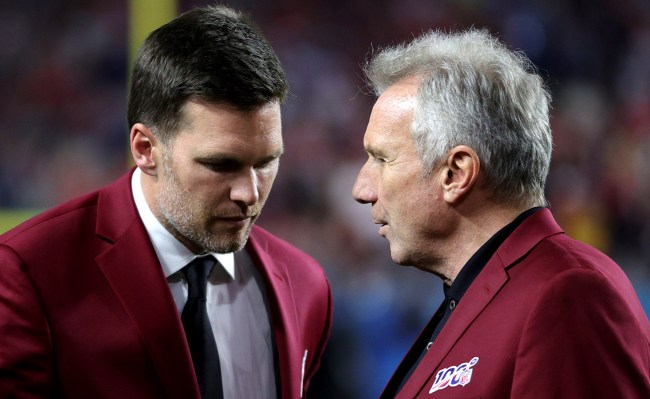 NFL Hall of Famer Joe Montana spoke to Tom Brady at Super Bowl LIV and based on that conversation he thinks he knows the reason why TB12 ended up leaving New England for Tampa Bay.

Montana, who Brady has said was his idol growing up in the Bay Area, spoke with the longtime Patriots quarterback while the two of them were participating in the NFL 100 All-Time Team presentation during Super Bowl LIV.

On Wednesday, during an appearance on The Jake Asman Show, Montana expressed his surprise that the Patriots didn’t try harder to keep the face of the franchise for the past 20 years.

“Honestly, I was shocked they let him get out of New England,” said Montana . “I would have thought they would have done everything they could to try to keep him there.

“I spoke to Tom while we were at the Super Bowl. I don’t think he was happy with the way things were progressing there and his ability to have input. I think that was a big decision for him to make, to leave there. Obviously, it’s a place he’s had a ton of success at. Going to another team, he chose a pretty good one, I think.”

Montana also appeared on NFL Network’s Good Morning Football on Wednesday and offered up some advice to Brady as he begins playing for a new team.

“Obviously it’s a little different right now with the virus and what they’re able to do and how he was able to communicate with his new team when he got there,” said Montana.

“And I think the biggest thing is, finding a way, no matter what, there will always be those guys that are even a little skeptical of, I don’t know how you are, Tom, but until you prove you can do it for them, they’re always skeptical about it.

“The same thing happened in Kansas City and once that happened, once you get totally accepted in there, which I don’t think it will take long — Tom’s not the kind of guy who will make anything difficult — so I think he’s going to be fun, fun to watch.”

Montana added, “I think they’ve got a pretty good team down there, too. They put up some big numbers last year. And when you add in Tom and crazy Gronk down there, I think it will be interesting if we get to see them play. Looking forward to it.”

Notably, Montana went through a similar decision at the end of his NFL career. After 14 seasons with the San Francisco 49ers, winning four Super Bowls, three-time Super Bowl MVP also did the unthinkable and changed teams, joining the Kansas City Chiefs, leading them to their first division title in 22 years.

Perhaps Brady is just following his idol’s blueprint. He could definitely do worse than copy Joe Cool.