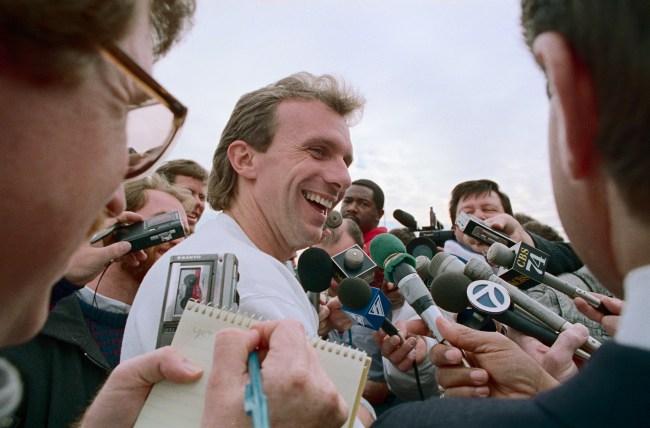 Kill ’em with kindness. That seemed to be the mantra that Hall of Fame quarterback Joe Montana followed when it came to trash-talking opponents during his illustrious NFL career — which included four Super Bowl wins and some of the most clutch performances ever seen — and, in a weird way, it actually worked even better than aggressively going after other players.

That’s according to another Hall of Famer, Mike Singletary, who recently joined 95.7 The Game’s “Damon, Ratto & Kolsky” and talked about Montana’s legendary way of getting in opponents’ heads. Take a look below at what the Chicago Bears legend had to say about Joe Cool’s unorthodox ways.

“Joe got up and he said ‘Hey man, that was a nice hit, good hit. Wow yeah that was good…”

“You just want to kill him at that point.” 😂@CoachMSing recalls what it was like playing against Joe Montana pic.twitter.com/vd0CXHH0ez

“He didn’t give you the pleasure of getting up and looking scared and moaning or anything like that,” Singletary told 95.7 The Game’s “Damon, Ratto & Kolsky.” “The thing that Joe did, he got up and he said, ‘Hey man, that was a nice hit. Good hit. Wow. Yeah, that was good.’ Might wipe the blood from his nose and get back in the huddle the very next play and throw a touchdown.”

Montana wasn’t done after scoring, though. That’s when Joe Cool would twist the knife in his own way.

“(Montana would) come up to you and pat you on the butt and say, ‘Hey man, good job. That really was a good hit though,’ ” Singletary said. “You just want to kill him at that point.”

That’s some mean shit from Joe Montana, guys. In a game like football, when everyone’s moving a million miles per hour and emotions are running high, the former quarterback was quick to dish out verbal participation ribbons to opponents, which, per Singletary, only pissed defenders off even more — and with good reason.

This whole polite trash-talking method that Montana seemed to use is common among some other all-time greats in other sports, too, as we’ve heard from opposing players in the NBA about how Tim Duncan’s kindness while talking to opponents actually made him one of the most successful trash-talkers; at least to Kevin Garnett, who detailed Duncan’s unique way of throwing him off his game.

Look, the best kind of trash-talkers are the ones who get into the heads of other players to distract them from the task at hand, we all know that. While some athletes use a ton of vulgarity and insults — like Garnett himself, who once told Carmelo Anthony his wife tasted like Honey Nut Cheerios — Joe Montana and Tim Duncan’s method was almost even more effective, because it wasn’t what players were used to hearing, and it belittled them in a way that only made them angrier, not necessarily motivated. That’s some brilliant stuff.