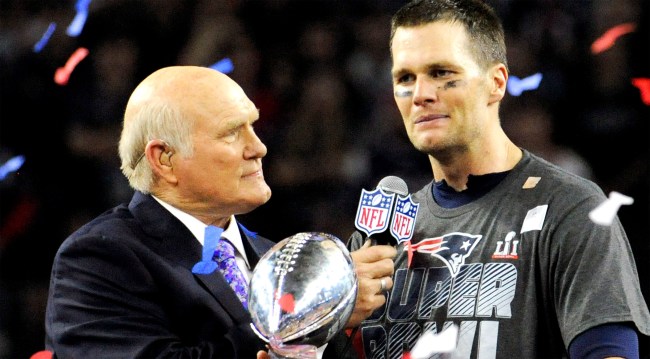 Ron Mexico, Red Glare, Mason Saunders… these are just some of the some great aliases used by professional athletes over the years.

Today we can add another one to the list: Tom Brady.

Wait, what? That’s not an alias. That’s the real name of a Lombardi tossing seven-time Super Bowl champion quarterback.

It also happens to be the fake name one Terry Bradshaw used 38 years ago today when he checked into the hospital in his hometown of Shreveport, Louisiana for a little “minor” elbow surgery (that actually ended up keeping him on the shelf until Week 15 that season and resulted in his retirement after throwing just 8 passes).

On this date in 1983, the winningest quarterback in Super Bowl history checked into a Louisiana hospital using an assumed name. pic.twitter.com/Yr3ujc0fHC

Bradshaw, who owns a farm south of Shreveport, La., was operated on the same day for muscle tears in his right elbow, Boyd said. He left the hospital March 5.

“Many times, we have to admit people under an assumed name or under no name to keep the press and the fans away,” Boyd said.

1983 was also the year that the Steelers passed on a kid from the local University of Pittsburgh named Dan Marino in the draft, instead selecting a nose tackle nicknamed “Señor Sack” – Gabe Rivera.

Rivera played in just six games during his NFL career before becoming paralyzed in a car crash while driving drunk. He did have two sacks in those six games though, so his nickname appears to have been well-deserved. Marino, on the other hand…

The real Tom Brady, by the way, was only five-years-old at the time of Bradshaw’s surgery.

Needless to say, NFL fans have been having a lot of fun with Bradshaw’s choice of alias.

So technically this means Tom Brady has 11 super bowl wins

So… who is Tom Brady impersonating?

I knew Tom Brady was fake. The NFL is rigged

There's only one clear answer: Terry is Biff from back 2 the future 2 and he has the almanac. It's the only explanation.

we live in a simulation

This we already know.