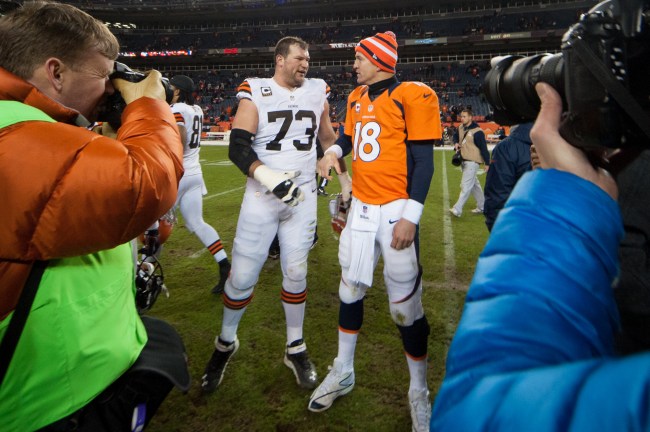 Warning: I’m going to put a visual in your head that is guaranteed to be unpleasant. Bare with me.

Imagine former Browns offensive tackle, Joe Thomas–who in his playing days was 6’6” 310 lb.–walking into your place of employment, dropping trou, and taking a big ole’ steamer on your desk, not wiping, casually pulling his pants up (while exposing his toxic grundle), giving you a gentle albeit condescending kiss on the cheek, and walking out.

This is essentially a tactic that Peyton Manning advocated Thomas doing so he could get traded from his lowly Browns to the surging Broncos.

On The ThomaHawk Show, the 10-time Pro Bowl lineman revealed the fool-proof plan.

“When I was in my seventh year, the Broncos were making a run, Peyton Manning was still the quarterback. Peyton called me up and basically asked me to go Antonio Brown on our GM at the time in order to get traded. Because there was some conversation about trading me to the Broncos because they had lost their left tackle for the season. And he asked me to go into my GM’s office and poop on his desk. “

Keep in mind, Thomas has gone on record claiming he’d eat 4,200 calories on INACTIVE days. Before bed, he used to two big glasses of whole milk and a sleeve of thin mint Girl Scout cookies to keep the weight on. Even worse, in high school, Thomas would take an entire loaf of bread, make it all into PB&J sandwiches, and the eat half a sandwich every hour with a glass of whole milk until the loaf was gone.

I wouldn’t wish his Chernobyl dumps on my worst enemy.