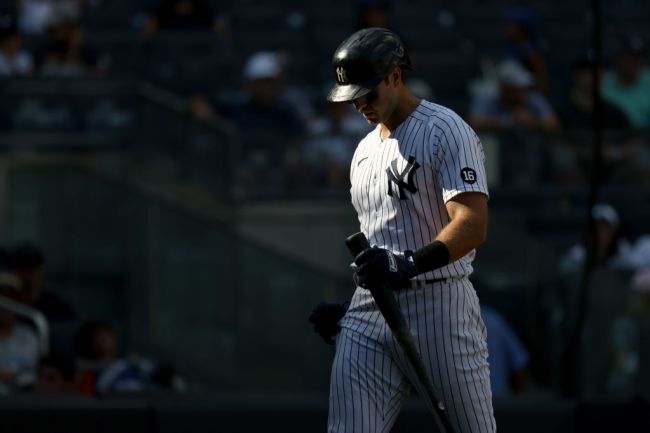 While the MLB offseason has brought us no closer to seeing any actual baseball, it has given us plenty of opportunities to talk about the finer points of the game. The MLB Hall of Fame voting gave us the chance to discuss the merits of dominating baseball while potentially getting help from some special vitamins.

While the baseball world came down on the wrong side of that debate and left Roger Clemens and Barry Bonds out of the Hall of Fame, it now has the chance to fall on the right side of another debate. That debate is about the shift in baseball.

Based on comments he made to the “The Athletic”, Joey Gallo wants to see the shift “fixed” in the MLB.

Should MLB ban the shift? pic.twitter.com/yyLxNnlDK0

You would think that Gallo wouldn’t be all that concerned about the shift to begin with considering how frequently he doesn’t even put the ball in play. On the list of seasons with the most strikeouts in baseball history, Joey Gallo shows up 3 times in the top 25. He averages nearly 1.5 at-bats per game where the shift doesn’t even matter.

This explanation really just feels like Gallo not taking responsibility for a .206 batting average. Opposing teams have him figured out. They know that they can basically leave the left side of the field open and he’ll still try to pull it down the right side.

Taking the strategy out of baseball is just a ridiculous idea. You can pack your defense into the middle of the court against teams that can’t shoot in basketball. You can drop in 8 in coverage against football teams that can’t run. You should be able to put as many players as you want on the right side of the field if a lefty can’t hit the ball to the opposite field.

Opponents are begging Joey Gallo to hit the ball to the left side of the field. He needs to learn how to do it.