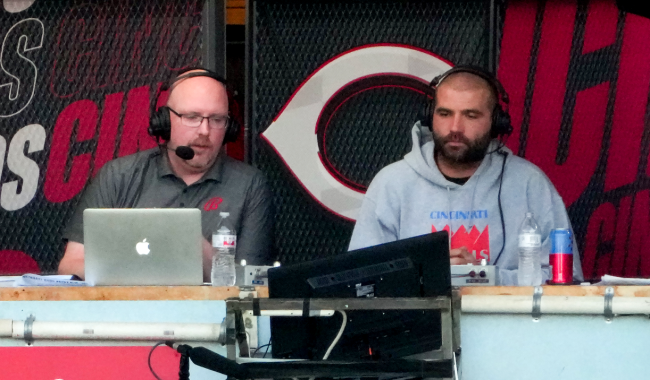 For 16 years, Joey Votto has been one of the best, most consistent players in all of Major League Baseball.

Those are probably Hall of Fame numbers, but since Votto has played his entire career for the Cincinnati Reds he has only been in the playoffs four times and has never made it to even one National League Championship Series.

So, despite winning the NL MVP Award in 2010 and putting up incredibly solid numbers for over a decade and a half, not many fans know much about the 39 year-old Reds first baseman.

That has all started to change this year, however, as Joey Votto has proven to be wildly entertaining when someone gives him access to a live microphone.

A perfect example of this occurred on Tuesday during the Reds game versus the Chicago Cubs.

Votto, who had to have season-ending surgery for a torn rotator cuff in August, joined the Cincinnati Reds TV booth and made a wager that almost cost him some serious cash.

Every season since 2008, a truck has sat past on display beyond the outfield fence at Great American Ball Park. Every home game one fan is selected and if a Reds player hits the truck sign or the truck itself then that fans wins it.

“I feel like nobody wins the Toyota Tundra,” Votto said to broadcaster John Sadak in the sixth inning. “Let’s do something this inning. If anybody homers on the right side of center field, I’ll buy the truck for the fan. Yeah, why not?

Unbelievably, on the very next pitch Reds batter Chuckie Robinson roped a ball into the right field seats about 15 to 20 feet foul.

“I’ll tell you what. I may change the criteria here,” Votto immediately joked as the broadcasters had a good laugh at his expense.

Joey Votto: the gift that keeps on giving pic.twitter.com/fLtzf932N5

Luckily for Votto, that was the only expense he had to pay because he escaped the sixth inning without a home run being hit in the designated area.

For the record, two fans have actually won the truck, but neither of them won it by following the normal rules.

In 2015, Jay Bruce won a fan a truck with a home run when the Reds announced if a player hit a homer into the Sun/Moon Deck seats or Visitors Bullpen during two specific series of games they would win.

It also happened in 2018 when Jesse Winker homered, came within three inches of the sign, and local Toyota dealers decided that it was close enough.