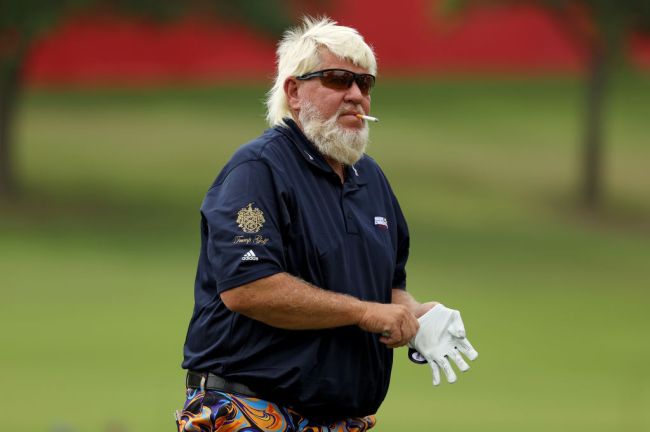 John Daly is a two-time major winner and earned over $10 million during his playing career. Those accolades alone make him a legend, but you couple that with his partying lifestyle and you have one of the great characters not only in golf history but sports history in general.

Daly is 55-years-old now, so you would think that we’ve heard every story about the guy by now, but every so often we hear a new legendary tale about the man.

Pat Perez, a three-time PGA Tour winner and great friend of Daly’s, recently joined the Fore The People podcast and shared a number of unbelievable party stories about Daly. One, in particular, stands out though, the night Daly suffered a stroke while partying at Perez’s house. What ensued afterward is the stuff of legends.

(The story begins around the 71-minute mark of the podcast.)

“He had a stroke at my house. I couldn’t find him, I was looking for this mother f–ker for like 45 minutes,” Perez began. “Go around the house, and I finally see him around the f–king corner and I’m like ‘John, where the hell are you at?'”

With a cigarette in his mouth, Perez notes, Daly says “oh, bubba I’m having a f–king stroke.”

The story, believe it or not, gets even wilder from here.

“We get to the hospital, and Peter goes ‘we need a smoking room,'” Perez explains. “I go ‘Peter, are you guys brain damaged, or am I missing something here?'” I go home, wake up and get a call from John saying I need to go pick them up from the hospital. It was like 10:30 in the morning, only like six hours later.”

“He was outside smoking when I get to the hospital. He gets inside the car and goes ‘bubba, I need a f–king drink.’ I go ‘no, that’s actually the last thing you need.'”

“We get back to the house, and he’s drinking.”

For any other person on the planet, this story would be absolutely shocking, but if you’ve heard other stories about Daly, this was pretty typical behavior for him back in the day.

Perez followed that story up by sharing about the time Daly once drank 72 beers one afternoon at Hooters.