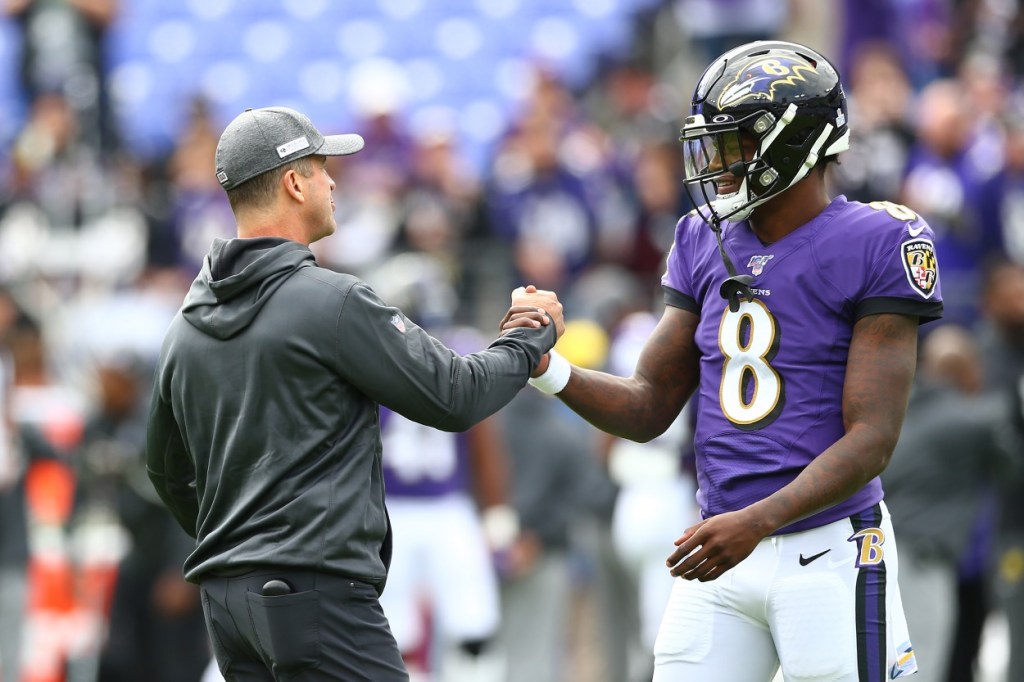 The Baltimore Ravens have literally crafted their offense around the versatility of Lamar Jackson. Losing him to free agency would require a near-complete retooling of the offense. So the team desperately wants him to commit to a long-term contract but Lamar has said he won’t sign an extension yet. For now, Lamar is just focused on being the best possible quarterback that he can be.

Ravens head coach John Harbaugh was a guest on The Rich Eisen Show a few days ago. Rich grilled him on where both parties stand with Lamar’s contract and it’s interesting to hear the coach speak up so much about it. The interview starts with Harbaugh talking about going to Augusta National and then turns to the NFL Draft before later turning to Lamar Jackson.

Rich Eisen: “I’ll tell you what I’m digging at, then. Lamar’s your long-term quarterback, right?”

John Harbaugh: “Yes, of course. I can guarantee you there’s going to be a big Twitter storm when I say this: we are NOT going to draft a quarterback.”

Rich Eisen: “Here’s the thing is the rumor mill goes haywire in our business when something happens that we don’t quite understand. All quarterbacks say they want their money. They either demand it outright or they expunge their Instagram accounts of all fingerprints between them and the team. Or have their agents send out something or whatever.

John Harbaugh: “He’s a unique guy. People have been scratching their heads and trying to figure out Lamar probably for a long time, you know, ever since he was a kid. And he’s got his way of going about doing things. But that’s what you love about him, it’s what I love about him. Get him on here and ask him. Maybe he’ll tell you.”

Hey, when it’s God’s will and Lamar’s will at the same time, it’s gonna all fit together. I do believe Lamar when he tells me that, man, he just wants to be the best quarterback he can be, and that’s what he’s thinking about right now. He doesn’t think he has to think about his contract. He feels like he’s got time to do it. Yeah, you could argue that one way or the other. But everybody gets to make that decision for themselves. That’s a great thing. That’s his choice, not somebody else’s.”

To all the pundits talking about Lamar Jackson

John Harbaugh: “I’ll tell you what, all the pundits out there, if you want to talk about your particular contract situation and how you’re doing with your salary and when you’re gonna go ask your boss for a raise and all that, maybe we can all talk about that back and forth and have that conversation. But in the end, the person gets to decide for themselves, you know? So that’s what Lamar’s doing. I think it’s kind of funny and cool and fascinating how everybody wants to talk about it and speculate on it, but it’s really pretty simple, I think. He’s not ready, you know? And when he’s ready, we’ll be ready. And when that happens, we’ll have something.”

“We had a serious conversation at the end of the season with Lamar and Eric and myself. And he made it pretty clear where he was at with it and what he wanted to do this offseason, and that was really the last formal one we had.”

That’s a LOT to digest but only because John Harbaugh had so much to say. When you take a step back and distill his comments it really comes down to Lamar Jackson wants to wait until his contract is up to renegotiate.

From the outside, this seems incredibly risky given the rate of injuries in the NFL. There’s always the risk of injury to anyone playing in the NFL but there’s typically some guaranteed contract money to assuage the fears of that risk.

Lamar Jackson is betting on himself here and I respect it. He wants to go out next year and be the best QB he can possibly be. But the risk of losing him to free agency or a potential injury is making whole lot of people feel anxious. That cannot be denied.