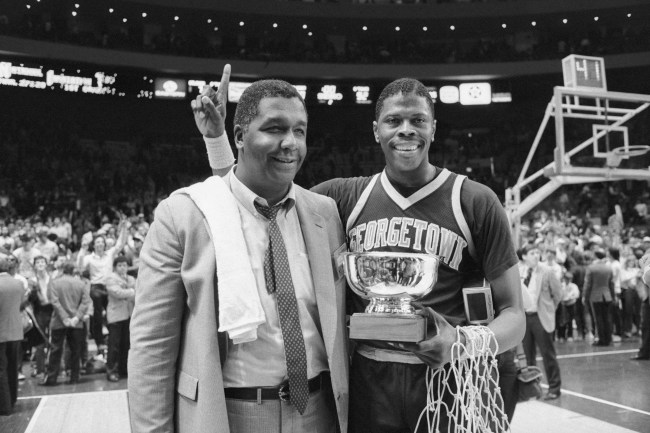 John Thompson, Hall of Fame coach and molder of NBA royalty like Allen Iverson, Patrick Ewing, and Alonzo Mourning, died this weekend at the age of 78.

While the news of Thompson’s death is sad, it’s a minor miracle we didn’t receive this news two decades ago when the Georgetown coach was ticketed to board the doomed American Airlines Flight 77 departing on September 11, 2001.

Thompson, then in his late 50’s, was set to fly to New York to participate in a studio interview on Jim Rome’s show at the time.

According to ESPN, the coach wanted to do the interview but still catch his buddy’s birthday party in Las Vegas on September 13, so he booked the ticket on Flight 77 to give himself ample time. Serendipitously, that didn’t work for the show’s producer, Danny Schwartz, who urged Thompson to push his flight back a day.

Thompson essentially told Schwartz to piss off, but the young producer was bravely tenacious, and Thompson ultimately caved.

In 2011, the Georgetown legend appeared on Rome’s show on the 10-year anniversary of the tragedy to tell the harrowing story, claiming to he felt Flight 77’s impact from his home near the Pentagon as it crashed that morning.

“[Thompson’s assistant said], ‘You were supposed to be on that plane. If that kid hadn’t have talked you out of it, you would’ve been on that plane,'” Thompson said. “The strangest thing about it was, it’s hard to be elated about all of it because of what happened. I’m appreciative. I went out on my porch, smoked a cigar, said my prayers … but at the same time, you can’t be too jubilant about it. But had it not been for that set of circumstances, I would have been on that plane on the 11th.”

Rome even ended up putting producer Danny Schwartz on the phone to speak with Thompson.

“Let me tell you something, if you’re ever in Washington, D.C., you look me up,” Thompson said to the producer. “I was antagonistic in those days, and how you handled it saved my life, and I appreciate that.”

I can’t imagine that playing the “I saved your life” card would produce anything less than a lifetime supply of floor seats to Hoya games.

Thompson used his good fortune to pay it forward, and eventually would “save the life” of one of the most revolutionary sports figures in NBA history.

He was the first Black coach to win a NCAA title.

He won two as a player w the Celtics.

He had a 97% graduation rate for his players at Georgetown.