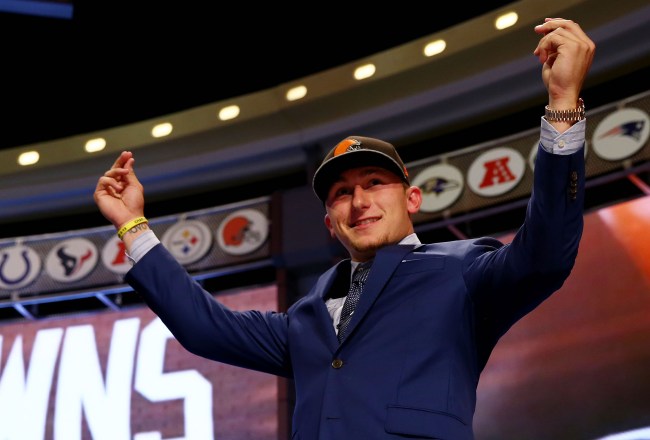 It’s been a long, strange trip for Johnny Manziel, who had a ton of potential until he was drafted by the Cleveland Browns in the first round of the 2014 NFL Draft and was doomed by the curse that befalls basically every single person to play quarterback for the team.

Manziel could have had the makings of the star but his mediocre on-field performance was heavily shadowed by his antics off of it, and after two seasons filled with controversy stemming largely from his hard-partying ways and mental health issues, he found himself without a home in the league.

After a brief hiatus, Manziel announced ComebackSZN had officially arrived when he revealed he’d signed a CFL contract with the Hamilton Tiger-Cats, who would end up shipping him off to Montreal before Johnny Football was unexpectedly banned from the league last week.

Now, Manziel is searching for another league to give him a chance and he has more than a few options out there, some of which are more likely than others.

Odds for what league Johnny Manziel will play in for his next professional football game:

As you can see, oddsmakers don’t seem to think Manziel has any chance of making it back to the NFL at any point in the near future, but according to an anonymous league executive who shared his thoughts on the situation at the most recent combine, he might not be as much of a longshot as you’d think.

According to NESN, an unnamed team representative spoke with ESPN’s Mike Sando over the weekend and revealed he’s almost positive the Oakland Raiders would be willing to take a chance on Manziel:

[Jon] Gruden’s relationship with Manziel and affinity for the quarterback made one exec sure the Raiders would be the team to sign him. Manziel’s recent CFL demise was the genesis for that discussion.

Jon Gruden signing Johnny Manziel could be the most Jon Gruden move in the history of Jon Gruden and I am very here for it.

Let’s make it happen, Jon. Give the people what they want.