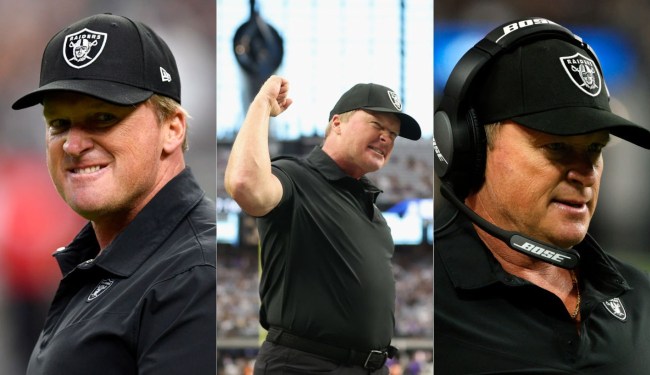 While this phrase gets tossed around far too frequently, it truly applies when it comes to Las Vegas Raiders head coach Jon Gruden: the man is a character. In fact, almost literally, as his nickname is “Chucky”, which is a reference to the fact that he resembles the *actually fictional character* Chucky.

But more so than his murderous-doll-looking face, what makes Gruden such a character is his personality. It’s why he was such a beloved analyst on Monday Night Football and why ESPN has struggled at finding his replacement ever since (although, if they were smart, they’d simply give the Manning brothers a blank check to get them in the main broadcast booth following their electric simulcast debut on ESPN2).

If ESPN were smart they’d simply back up the Brinks to get both Mannings in the booth for the main MNF broadcast. Wouldn’t even matter who did play-by-play.

Given the atmosphere in Las Vegas on Monday night — the first-ever game at Allegiant Stadium in front of a crowd — and the result of the game, with the Raiders taking down the Ravens in overtime following a 17-point fourth-quarter, it should come as no surprise that Gruden went through the entire spectrum of Gruden emotions over the course of the three-plus hour broadcast.

Love Gruden sneaky holding back some man tears after pumping up the crowd and being with his people pic.twitter.com/sQ9vEZy5YB

Gruden really starting to “grow” into his Caliendo persona…. pic.twitter.com/b2qra1wuEw

I love how when Jon gruden gets mad his face turn’s into a butthole pic.twitter.com/pZvi4YmKxa

Gruden was FIRED up after the win 🔥pic.twitter.com/CnULBkLOzh

"I felt like I died and woke up … and died again. I was like a cat, I had multiple lives tonight."

Jon Gruden on the crazy ending to the Raiders-Ravens game 😂😂😂 pic.twitter.com/6SOO207S1s

There must be some method to Gruden’s madness, as the Raiders have now won three straight opening games. Never change, Chucky, never change (and given that he still has seven years left on his 10-year, $100 million deal, I doubt he ever will).