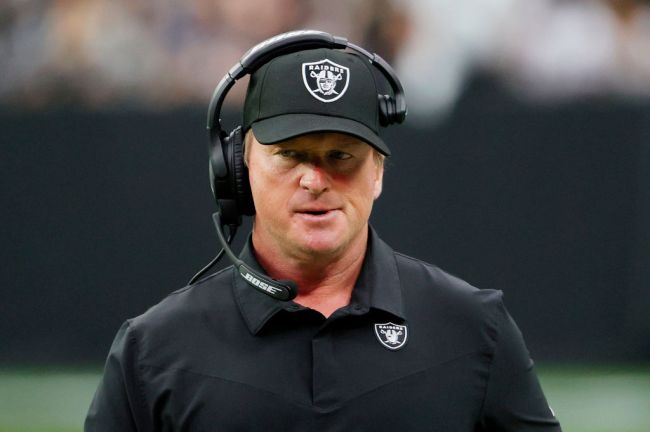 Jon Gruden might go after the NFL following the leaked email scandal that cost him his job.

According to CBS Sports’ Jason La Canfora Gruden is considering suing Roger Goodell and the NFL for leaking his emails that were found in the WFT workplace investigation.

Former Raiders coach Jon Gruden continues to mull his legal options with several lawyers advising those close to him that they would be willing to take on a lawsuit against commissioner Roger Goodell and the NFL over the handling of emails that resulted in Gruden resigning a few weeks ago.

This is anything but over,” as one league source put it.

Some lawyers have asserted that Gruden could have a tortious interference case, claiming the NFL influenced his ouster for private emails that were sent while he was not a league employee that were revealed at a time to inflict maximum damage to Gruden’s career. The lack of transparency in the WFT investigation — no written report, no revelation of evidence — has also led to questions about the nature of what other types of potentially offensive language was being used by others in NFL circles. The NFL has said there was no other incidents of such language being used in the 650,000 emails it perused.

Several NFL insiders, including Pro Football Talk’s Mike Florio, believe the NFL leaked the emails that got Gruden in trouble.

A league spokesman was adamant that the NFL did not leak the emails.

The NFL says it did not leak the emails that led to Jon Gruden's resignation and engulfed the sport in controversy. On Tuesday, Tanya Snyder told fellow NFL owners that she and Daniel Snyder are not responsible for the leaks. With @NickiJhabvala…. https://t.co/jlfZ2ho0Vd