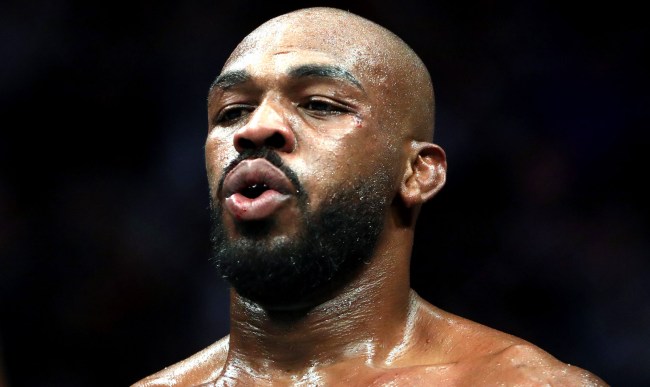 Many people scoffed when two-time UFC light heavyweight champion Jon Jones vacated the championship on August 17th, 2020 and announced that he was planning to move up to heavyweight following his controversial decision over Dominick Reyes at UFC 247.

Since that fight, almost one year ago, the only time fans have seen Jones is when he is doing things like getting arrested for DWI and allegedly shooting a gun while drunk or when he’s chasing suspected robbers around with a shotgun.

As it turns out, Jones has also apparently been putting in some serious work as, on Wednesday, “Bones” posted some photos to social media showing him at a rather jacked 250 pounds.

Quite a change considering he has been weighing in at around 205 pounds for his entire mixed martial arts career.

“It feels good to not be depriving myself of food anymore, can’t fit any of my suits but I’m moving well. 250#,” the 33 year-old Jones wrote on Instagram.

Jones, 25-1 in his MMA career (20-1 in the UFC), answered a few questions from fans who were stunned to see such a body transformation from the man many consider to be the GOAT of MMA.

I feel ready to take on any challenge, this is the first time in my career that I can say that. I finally have the size to be ready for anyone https://t.co/o6L69dwuKf

No I’m not worried about cardio, I hold myself to a very high standard,A light heavyweight standard. Some of these guys may be stronger, but they can’t possibly push as hard as I can. I’ve been able to outwork literally every LHW, i’ll do the same at heavy.. It’s called heart https://t.co/xZYvCvA8qQ

Considering the last time the current UFC Heavyweight Champion, 38-year-old Stipe Miocic, fought he weighed in at 230.5 pounds, he should probably very concerned.

Especially if the videos below are any indication of how Jones has been training over the past year.