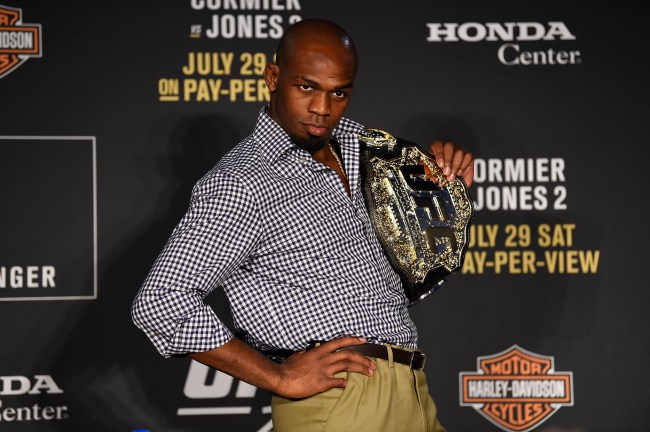 The California State Athletic Commission came down on Jon Jones hard. The CSAC has reportedly revoked the former UFC light heavyweight champion’s license and fined him $205,000 for testing positive for the banned substance Turinabol before his win over rival Daniel Cormier at UFC 214 last July.

Ariel Helwani, a journalist for MMA Fighting, tweeted out the following today:

Official: The California State Athletic Commission votes to revoke Jon Jones’ license and fine him $205,000 (40% of his disclosed purse for the second Cormier fight, plus additional $5k). He now has to go through USADA. He could re-apply for a license in March 2019, however CSAC can deny that application if they see fit. And if USADA gives him a longer suspension he won’t be able to reapply until that suspension has been completed.

The CSAC’s decision came despite Jones’ adamant denial of the accusation during today’s disciplinary hearing in Anaheim. The best pound-for-pound fighter in the sport told members of the CSAC:

“Science has been kicking me in the ass.”

“This situation is like really, really crappy. I don’t understand how any of this happened and how it got in my system,” he said. “Imagine being me. I have no clue how this happened. I’m just trying to figure it out just like everybody else.” [via MMA Mania]

The commission extending no sympathy toward Jones, especially after he admitted to never completing the USADA anti-doping tutorials in 2015, instead having his management team complete them and forge his signature. And it doesn’t help that this is Jone’s second failed steroid test under the CSAC.

After the judgement, Jones took to Twitter to send a message to his 2 million followers.

I want to thank csac for taking the time and hearing my case, and executive officer Andy Foster for saying he believes me.