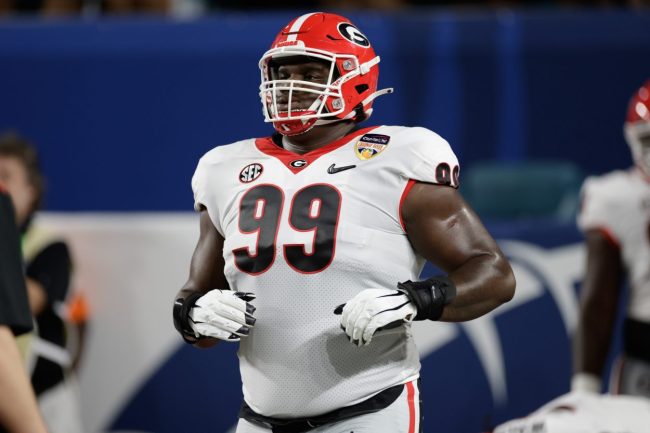 After officially declaring for the NFL Draft last week, Georgia defensive tackle Jordan Davis has been getting ready for the next level. In a recent video from his offseason work, the 22-year-old looks insanely quick for his size.

Davis, a superstar defensive lineman for the national championship-winning Bulldogs, stands 6-foot-6, 340 pounds. He recorded 32 total tackles in 2021 with two sacks, and scored the biggest big man touchdown in college football history, but his numbers don’t tell the full story.

Because Davis is so big, and such a physical freak, he is often the focus of an opposing offensive line. His presence in the middle is impossible to ignore, which opens up opportunities for his teammates around him to make plays while the offense worries about Davis.

NFL scouts are already salivating over Davis’ measurables and his on-field play makes him that much more desirable. In preparation for the Draft, Davis has been working with former Falcons All-Pro defensive end Chuck Smith.

These days, Smith is a pass rush expert and ran Davis through some workouts earlier this week. He posted a video of the bag drill on Twitter.

The results are insane.

For someone who is so large, Davis should not move through the bags the way the he does. He is quick-footed and nimble with a low center of gravity and a great ability to change direction.

UGA DL Coach @TravionScott got @jordanxdavis99 moving like a cheetah 💨
•
Added this NFL Combine & Pro Day Drill in training Today.
•
His ceiling is so high. He should be a Top 10 NFL Draft Pick. I know what they look like, he’s one🙌🏽
•
•#DrRush #PassRushFamily #NFLDraft pic.twitter.com/oJjXe87KAF

As of right now, Davis is projected to be a first round pick. If his showing at the NFL Combine is anything like Smith’s video, he could easily move into the top spot at his position. What an athlete!