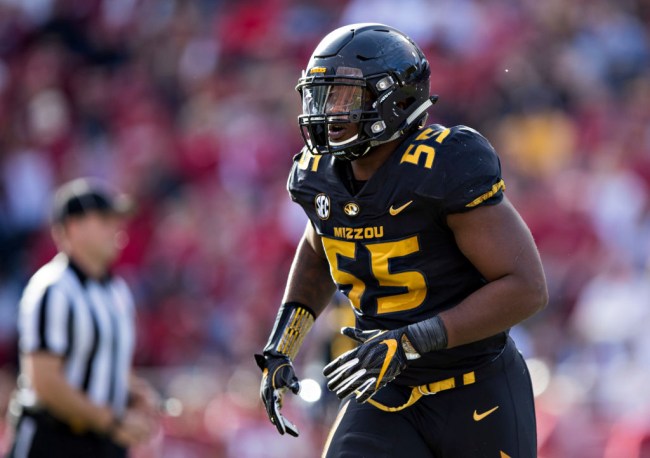 By most accounts, being a professional athlete is a pretty sweet gig and I don’t think there are many people out there who would turn down the opportunity to make an obscene amount of money to play a game for a living if given the chance.

Unfortunately, making it to the big time is easier said than done—a reality almost everyone who fantasizes about becoming a pro is forced to acknowledge at some point.

Anyone who’s played sports competitively has had a moment where they were forced to come to terms with the fact that making it to the big league of their choice just isn’t in the cards. However, this can be easier said than done—especially when you’ve devoted your entire life to the game you love.

Former Missouri defensive lineman Jordan Harold has done exactly that, and after starting his college career at a Division II school, he decided to shoot his shot by posting up in the parking lot of Mizzou’s athletic complex before managing to convince a coach to give him a chance to walk on.

Harold put up respectable numbers during his two years with the Tigers but they weren’t enough to attract the attention of NFL scouts, and as a result, he’s still in search of a home following the draft.

Now, he’s doing what he can to rectify that situation by taking a page out of his old playbook and setting up shop outside the stadium of the Carolina Panthers, where he’s offering his skills in exchange for the most valuable currency known to man: hot wings.

“I JUST WANT A SHOT.”
Jordan Harold (@Tru_Giver) is holding a sign outside the @Panthers stadium saying, “Will pass rush for hot wings.” #KeepPounding @MizzouFootball pic.twitter.com/nMz5x8Ud3T

Harold isn’t the first person to take this route. Back in 2016, another former college player named Abiola Aborishade hung outside of Gilette Stadium for over a month trying to get the Patriots to give him a tryout.

Give this man a chance! Abiola Aborishade been outside Gillette for over 1/mo waiting for a tryout with the Pats. pic.twitter.com/7iPgs2Bvel

He never ended up getting the call so hopefully Harold has a bit more luck.