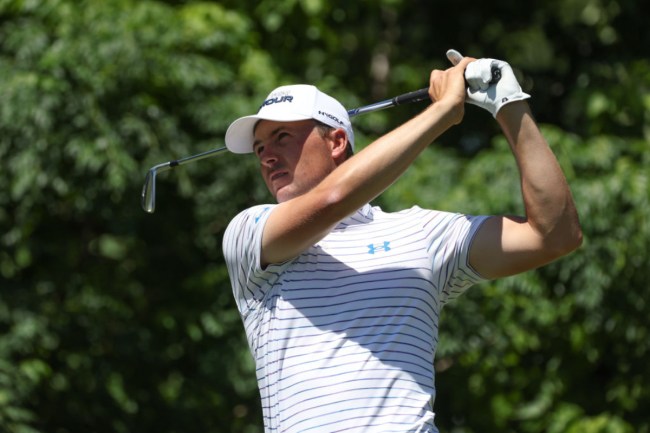 Jordan Spieth’s ability to get out of spots most golfers would deem ‘dead’ undoubtedly makes him one of the most entertaining golfers on the planet. His ability, and the regularity, of him escaping ridiculous situations is what makes him appointment viewing for most golf fans.

During Thursday’s opening round of the Charles Schwab Challenge, we were witness to his latest escape act and one that his caddie, Michael Greller, didn’t want him to attempt.

With a bad lie, trees in his way, and a water hazard very much in play, Spieth still saw a way out.

In the clip, Greller begins by saying “I just don’t see it, Jordan” before Spieth pulled off his magic.

“I was going to hit a straight punch cut at the cameraman and just get it to cover over the water and hit it hard,” Spieth explained.

Greller pushed back, yet again, but Spieth wasn’t having it. He then proceeded to almost hit the flag with his low, punch cut he said he was going to hit.

"I just don't see it Jordan." 😆 @JordanSpieth sees the game differently than all of us. pic.twitter.com/PCqL7Yikk9

What’s wild is that this wasn’t Spieth’s most ridiculous escape act of the day.

Three holes earlier in the round, Spieth was in the trees yet again. This time, however, he couldn’t go low, so he went over the trees, which completely blew the mind of on-course analyst Colt Knost.

Sometimes @JordanSpieth sees shots that the rest of us don't 😅

These moments between Spieth and Michael Greller will never get old. pic.twitter.com/WUapoAWxTM

Jordan Spieth is a wizard.