Jordan Spieth Shares How Much He Thinks About Winning The Career Grand Slam: ‘An Elephant In The Room For Me’ 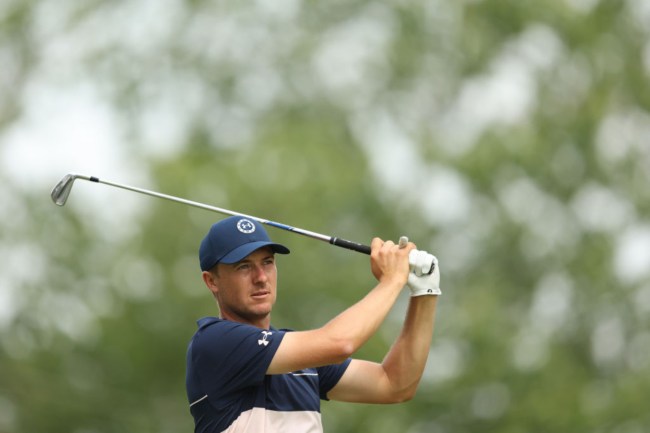 Jordan Spieth has had five chances of completing the career grand slam with a PGA Championship victory at this point in his career. While he’s still just 28-years-old and will have many more chances at completing the slam, the thought of accomplishing golf’s greatest feat is certainly something that weighs on his mind.

Spieth enters this week’s PGA Championship in incredibly strong form with a win and a solo second in each of his last two starts. His game should also be a great fit for Southern Hills, where the wind is expected to play a factor and short game ability should be at a premium.

Eyes will always be on Spieth every time he tees it up at the PGA Championship as long as he’s chasing history, but this week, in particular, things seem to have aligned well heading into the week.

Less than 24 hours before Spieth’s sixth attempt at the career slam gets underway, CBS’ Kyle Porter asked him just how often he thinks about completing the Slam.

Spieth’s answer was both honest and vulnerable.

“Certainly at this point, given having won the other three, it’s an elephant in the room for me,” Spieth explained. “It’s a goal of mine.”

“If you just told me I was going to win one tournament the rest of my life, I’d say I want to win this one, given where things are at.”

“Long term it would be really cool to say that you captured the four biggest golf tournaments in the world that are played in a different part of the world and different styles, too.”So, you feel like you kind of accomplished golf when you win a career Grand Slam, I guess.”

‘Accomplishing golf’ is such an interesting way of looking at what winning the career grand slam symbolizes, but Spieth is right. If he became just the sixth player to pull off the feat, there’s no denying he would have “accomplished” the game.