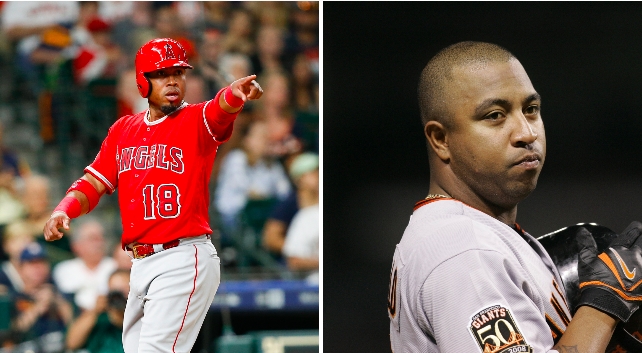 The accident reportedly occurred when their car collided with a rock that rolled on to the road in the state of Yarucuy, in Valbuena’s native Venezuela.

According to reports, the car was being driven by the driver for former Arizona Diamondbacks player and winter ball teammate Carlos Rivero, both of whom survived.

We are saddened by the tragic news that Luis Valbuena and former major leaguer José Castillo have died in a car accident. pic.twitter.com/C3nILO00SE

Valbuena, 33, just finished a two-year deal with the Angels and finished a Major League career hitting .226/.310/.394 with 169 doubles and 114 home runs in 1,011 total games, including a 2015 campaign with Houston when he hit 25 dingers. He played infielder for the Mariners, Indians, Cubs, Astros and Angels.

RIP Luis Valbuena, who I’ll choose to remember for being the guy to bat flip anything from a walk to a single to a double to a home run. pic.twitter.com/fwSmx0lNHb

We lost a good one. Always quick with a smile and down to have fun, Luis Valbuena epitomized love of the game. I’ll miss you friend. pic.twitter.com/i97jSvwC7E

We are deeply saddened to hear of the passing of former Angel Luis Valbuena and former MLB infielder José Castillo. Our thoughts and prayers are with their loved ones during this time of grief. pic.twitter.com/GxegOtJXuB

We are deeply saddened to hear of the passing of former Pirates infielder José Castillo.

Our thoughts and prayers go out to his family and friends during this difficult time. pic.twitter.com/yKw7soe8Ic

Remembering Jose Castillo, who died Thursday at the age of 37 in an automobile accident in Venezuela. Jose played 465 games with the #Pirates between 2004 and 2007, including this wild win over Milwaukee in June 2006. #RIP pic.twitter.com/TRh5ye2yOw

and here’s Jose Castillo making an incredible catch for Pittsburgh. both gone too soon😥 pic.twitter.com/pd9OPhsLBt