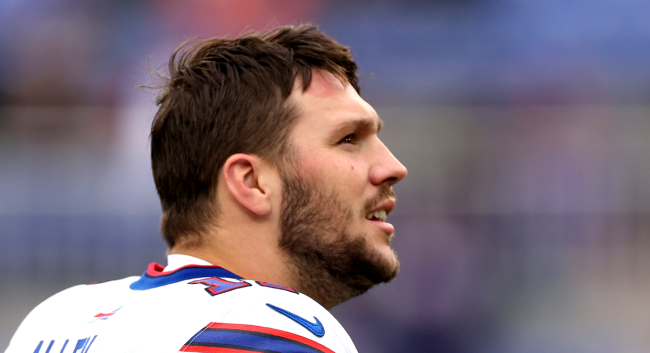 As everyone learned during this year’s edition of The Match, Buffalo Bills quarterback Josh Allen is (a) an avid golfer and (b) has a pretty darn good sense of humor.

On Sunday, after leading the Bills to a big comeback victory after being down by 17 to the Baltimore Ravens, Allen showed both of those traits were still very much true about him.

As Allen was exiting the playing field on Sunday, he was forced to walk underneath a rope that was very similar in nature to the one that took out PGA pro Bryson DeChambeau a couple of weeks back. (Warning: swear words were uttered by Bryson.)

Josh Allen was obviously among the many golf fans, including Paige Spiranac, who found DeChambeau losing his fight with a gallery rope amusing.

Because when faced with a similar situation on Sunday, Allen comically covered his eyes and turned his head to avoid a similar fate.

Even the Buffalo Bills Twitter account knew exactly what Josh Allen was doing and who he was mocking.

PSA: This is how to safely go under a rope at a sporting event. pic.twitter.com/ASQjvkoqd5

Good morning to everyone especially Josh Allen for this Bryson vs. Rope bit 😭🤣 pic.twitter.com/RDLctXCH2B

DeChambeau is literally never going to live his rope fail down.

😂😂😂 Bryson is never going to live that down, and I'm fine with that!

Many fans on Twitter just wanted to make sure Bryson DeChambeau saw what Allen did.

Others on Twitter just wanted to make sure that those watching the video of Josh Allen ducking under the rope noticed that at the very end of the clip a guy following the QB did indeed get clotheslined, a la Bryson DeChambeau, by the rope.

Watch it again and keep an eye out for this…