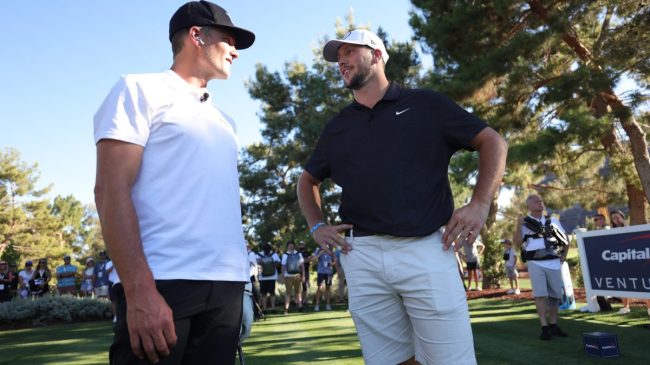 Tom Brady and Aaron Rodgers battled Josh Allen and Patrick Mahomes on the golf course as part of The Match. The veterans teamed up to beat the youngsters in the six-hole competition.

As you can imagine with their familiarity from the gridiron, the trash talk was frequent. In fact, it started much before the tournament, with the two sides trading verbal blows during the leadup up to the event.

That banter continued into play, with Allen and Brady actually letting their golf balls to the talking.

Prior to the showdown, Allen showed off a custom designed golf ball that had Tom Brady’s shirtless combine picture. It was, what he thought, the ultimate insult.

Josh Allen just said he’s going to use a golf ball with Tom Brady’s shirtless NFL draft photo in The Match that’s about to start in 30 minutes. pic.twitter.com/uILORDwhgm

He’d soon learn he was wrong.

Brady flashed his own special design, and it’s one that Allen might be unfamiliar with. At one point during the match, he turns to the camera and shows off a Lombardi trophy themed golf ball.

He then quips, “Hey, ask Josh if he’s ever seen one of these.”

It’s not the first time we’ve seen Brady whip out an awesome custom ball, but it’s certainly the most disrespectful.

While Allen is considered an MVP candidate in the upcoming campaign, he’s the only of the four participants that hasn’t won a Super Bowl. Meanwhile, Brady has won seven.

Rodgers and Mahomes have each held the Lombardi trophy, too. Brady provided the ultimate jab to his competition before then going on to beat him on the course. It should be fun to watch these two compete for a title on the gridiron in just a few months.