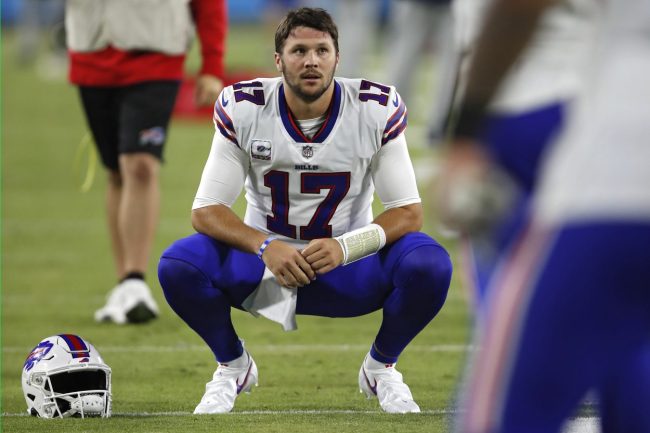 Bills quarterback Josh Allen admitted that he was “pretty sore” after Sunday’s 33-27 overtime loss to the Buccaneers. Two days later, an update has been provided from an unlikely source.

He threw a touchdown on the very next play. However, after finding the end zone through the air, Allen went over to the trainers on the sideline and had his foot retaped.

After the game, he entered his postgame press conference in a boot. NFL Network’s Ian Rapoport reported that he was/is dealing with a mild case of turf toe.

On Tuesday night, Allen appeared to be feeling better. The 25-year-old was allegedly seen out in Buffalo with significantly better mobility.

A photo of Allen began to circulate that appeared to show him and his girlfriend at Shea’s Performing Arts Center. They ventured downtown to see a performance of Hamilton, the musical.

Upon his arrival, the person who took the photo reported that he was not wearing a walking boot and did not limp into the theatre.

Per a #source of a #source, Josh Allen is at a showing of Hamilton tonight without a walking boot and with no limp. pic.twitter.com/4SrKpt7m0H

It is certainly one of the more bizarre reports in recent years, but it provided very valuable information.

Rumors that backup quarterback Mitchell Trubisky was in line to take more reps than usual in practice this week. That could still be true, but if Allen’s Hamilton viewing is any indication, he’ll be good to go come Sunday.