Josh Gordon Just Dropped Some Major Bombshells About His Drug Use, Rehab, Partying With Manziel 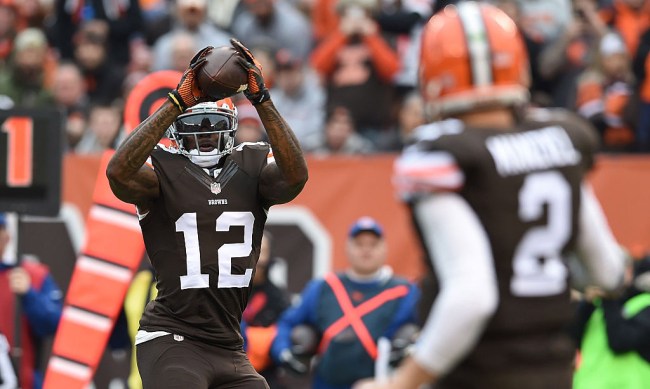 Troubled NFL wide receiver Josh Gordon revealed in a new documentary short for The Uninterrupted some major details about his drug use, his trips to rehab and much, much more.

Gordon, who hasn’t played in the NFL since December of 2014, was once one of the rising stars in the league. That was before numerous on and off-the-field issues got him suspended for 43 of his last 48 games with the Cleveland Browns.

Still only 26-years-old, and now suspended indefinitely by the NFL, Gordon recently completed his fourth known stay in rehab and decided it was time to come clean about his past transgressions. And there are a lot of them.

“I’ve used alcohol on many, many occasions, Xanax on many occasions, cocaine several occasions, marijuana most of my life, codeine, cough syrup, methazine is very prevalent where I’m from,” Gordon admit. “It’s what I grew up using.”

So much for Gordon just being a victim of an anti-marijuana agenda.

After being suspended for two games in 2013 for testing positive for codeine, Gordon was suspended again in 2014 for a DUI, after which he decided to check into rehab. Problem is, he didn’t take it seriously.

“My first thought was, ‘this is a publicity stunt'” he told The Uninterrupted. “‘This is just going to help the media deal with me. It’s going to help the fans be able to deal with it. I don’t know what they’re so worked up for anyway.’ I definitely wasn’t listening. I definitely wasn’t paying attention. ‘Okay, it’s a business move. Alright, cool let’s do it.’ I was there for like 14-15 days, it was a joke. It was pretty much a vacation. I had a bunch of good gourmet meals and took a little break and then got right back to work. And then led the league in receiving yards.”

The 10-game suspension in 2014 meant that Gordon needed to play in the six remaining games to have the season count towards being a restricted free agent. After playing five, Gordon went out partying the night before the final game with Johnny Manziel. He never made it to that sixth game.

“I didn’t wake up until 10 o’clock, 10:15, coming out of a blackout, I’m getting a bunch of texts and calls, from coaches like ‘where are you at, we’re headed to the tarmac already.’ I’m like ‘aw sh–,’ so drove up to the tarmac, and our general manager at the time, he kind of pulls me to the side and talks to me, he’s like ‘I’m sorry Josh, but you’re not going on this plane.’ I was watching the plane go off and it was like well ‘f– it, let’s go home, let’s party.’

Gordon also admitted that his drug use was enabled by coaches in college while he was at Baylor before eventually being kicked out of school.

“I’ve been enabled most of my life honestly,” he said. “I’ve been enabled by coaches, teachers, professors, everybody pretty much gave me a second chance just because of my ability. Not too long after I got arrested for possession of marijuana at Baylor, one of my coaches came by saying ‘you are going to get drug tested by the compliance office. This is how it’s going to work, this is what they are going to do. If they do call you in, here goes these bottles of detox.’

“He showed me how to drink them, showed me how to take them. That was my real first experience with getting over on the system and that authority not really being taken seriously because it was kind of being guided by somebody that’s employed by the same university.”

But then he got popped again for drugs and that was the end of his time at Baylor.

Now Gordon is training with Olympic gold medalist Tim Montgomery and says his last stay in rehab humbled him. He also says that he will once again apply for reinstatement.

Check out the entire fascinating documentary below…