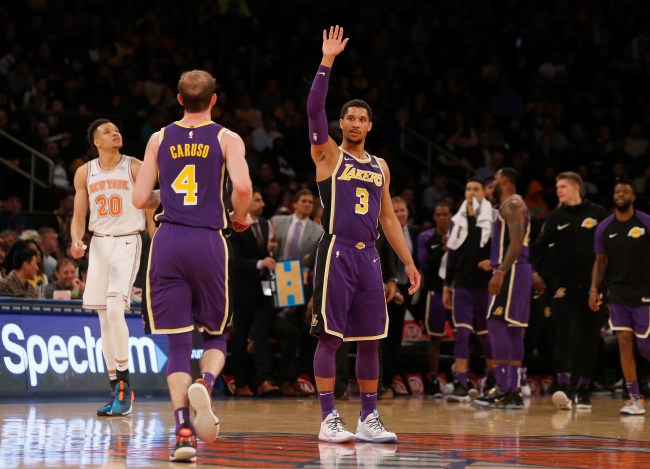 Josh Hart is not a fan of the analytics movement in the NBA.

During an appearance on the Gilbert Arenas podcast Hart blasted the non-athletic analytics types who have taken over the game and are telling players what to do on the court.

.@joshhart is not a fan 45 year old dudes with no athletic bones in their body telling him what to do. & no love for analytics. pic.twitter.com/rXJeeTAMSG

“We got people who never hooped before doing all the analytics and bullshit. They never hooped before. Trying to tell us what to do. Like, we’ve trained out whole life. We’re adults. We try to be professional when we bust our ass … You telling me that this dude that’s 45 that never played, doesn’t have an athletic bone in his body, gonna tell me how to play basketball?”

Things could get a bit awkward between Hart and new Lakers coach Frank Vogel who expressed interest in using analytics heavily during his tenure with the team.

“I’ve got a strong plan for how we’re going to play as a basketball team. I’m really, really excited about the chance to instill my beliefs in how it’s going to look. Like I said, playing for each other. Having an analytics based approach to playing the game outside-in. Using the 3-point line and the space that creates to open up a really strong basket-attacking team. And defensively building the team from the inside out. For all the talk of the 3-point line, it’s still most important to build your defense from inside to out. The basket is still the top priority, the paint is a top priority but then we will spread out and guard the 3-point line.”

Lakers fans noticed how Hart inadvertently shaded his new coach with his rant.

I like JHart but that's just the most ignorant statement he can make about basketball, he definitely gerting traded, he pretty much declared that he's not happy having Vogel as coach

Hart disrespected his coaches, JJ Redick, Kyle Korver, hatred of analytics, complained about his role and the changes the team went through, etc. Not a good thing to air publicly. The NBA is all about change, I won't imagine his attitude if he were ever traded.

Umm this does not line up with his new Coach Frank Vogel- when did he say this John? Curious! @TheLakeShowLife pic.twitter.com/hpUCB5wCLQ

Do you want to break the news to Josh on his, checks the calendar, 45yr old new head coach who climbed the ladder as a… Video coordinator/scout/analyst?