J.R. Smith’s Game One Jersey Is Up For Auction So Cavs Fans Have A Chance To Burn It 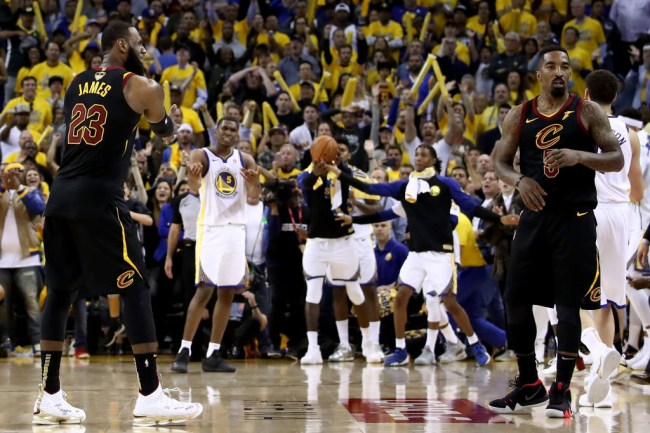 Not many people gave the Cleveland Cavaliers a chance coming into this year’s NBA Finals, and while LeBron James did his best to carry his squad on his back, his efforts were seriously hindered by the fact that he was playing on the same team as J.R. Smith. The Cavs had a chance to take the first game of the series in the final seconds of regulation, but Smith did everything in his power to make sure that didn’t happen (and created the amazing photo above in the process).

The Warriors ultimately took game one and permanently seized momentum before completing the sweep in a series most Cleveland fans would probably like to pretend never happened. With that said, some of those same fans may be interested in an item currently being auctioned off by the NBA.

Shortly after Smith committed one of the most impressive blunders in recent memory, the league took the jersey he wore during the game and put it up for auction. As of this writing, 58 people had submitted a bit for the piece of memorabilia, with the highest bid currently sitting at $3,000.

I’m trying to think of who would want to shell out $3,000 for this jersey and I have a couple of theories. The first is that Draymond Green is trying to get ahold of it so he can continue in a long line of trolling the Cavaliers by hanging it in the visitor’s locker room whenever they come to Oracle Arena.

It’s either that or Dan Gilbert, who could continue the proud Cleveland tradition of burning players’ jerseys by pouring some lighter fluid on it and ridding the world of the cursed relic.

You’ll still have a chance to outbid both of them until the auction ends on June 21.