J.T. Daniels’ Transfer Options For 2022 Are Starting To Take Shape, But His Decision Remains Very Fluid 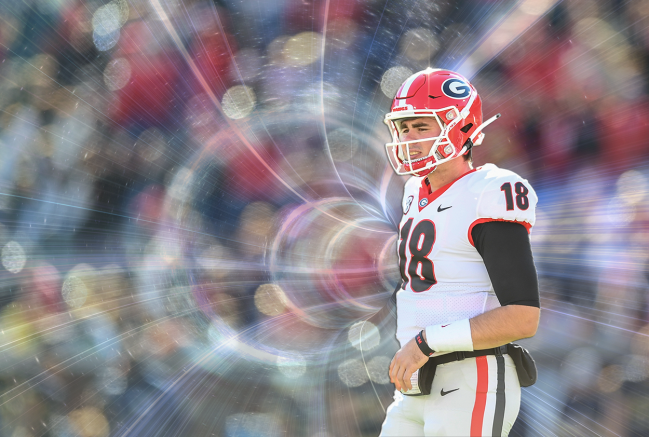 Former Georgia and USC quarterback J.T. Daniels entered the transfer portal on January 19, 2022, and has yet to make a decision on where to continue his college career. Although he is not in a rush, the picture of where he may end up is starting to take shape.

For starters, a return to the Bulldogs or the Trojans is likely off of the table entirely. Georgia is returning Stetson Bennett next season, and former five-star recruit Brock Vanagriff could easily play his way into the starting job. USC received a commitment from Caleb Williams.

Thus, Daniels will have to look for his third school in four years.

One option that has been floated around is Auburn. The Tigers do not have a solidified starter at the quarterback position.

T.J. Finley and Zach Calzada both transferred to play in Alabama after underwhelming showings at their previous programs. Robby Ashford, though incredibly talented in his own right, has not played a college snap in two full seasons.

Bryan Harsin will probably choose to start one of the three quarterbacks who are currently on campus. However, Daniels could be an interesting one-year rental.

More than likely, Daniels will not be on the Plains in 2022. That leaves a few potential options.

According to 247 Sports’ Chris Hummer, the 22-year-old was initially expected to play on the Group of Five level. He has had trouble finding a permanent home with a stable opportunity to start at his first two schools and if Daniels were to move down a level in terms of conference standing, there are quite a few programs who would offer him a clean chance to get on the field as QB1 and start putting up big numbers right away.

Georgia Southern could be one to watch. Former USC head coach Clay Helton is now in the same role in Statesboro and could recruit Daniels to the Sun Belt, just as he did to the Pac-12 out of high school.

However, Daniels has proved that he can be a viable Power Five conference starter.

Daniels went 7-0 as Georgia’s starting quarterback — 4-0 in 2020, and 3-0 in 2021 — and currently holds records four records among Bulldogs’ quarterbacks who have had more than 100 passing attempts. He put up the highest-career passer rating (168.1), completion percentage (69.5), yards per attempt (9.7) and yards passing per game started while in Athens.

Should he choose to stay on the P5 level, a few schools in particular are considered to be in the mix early on.

Missouri, LSU, West Virginia, Notre Dame, TCU, Oregon State, Penn State and Florida State have a need at quarterback. And according to Mike Griffith of the Atlanta Journal-Constitution’s DawgNation, “many of the schools” have been in contact with Daniels.

But with all of that being said, there is a lot of time left on the clock. All of those schools could choose to move on from Daniels and quite a few other programs will surely enter the conversation as quarterback situations continue to play out around the country and into spring practice.

Daniels is expected to conduct several interviews with coaches and make at least one visit to each program before making he comes to a decision. In the meantime, he is finishing up his degree at Georgia this spring and will be immediately eligible as a grad transfer at whatever school he chooses for 2022.