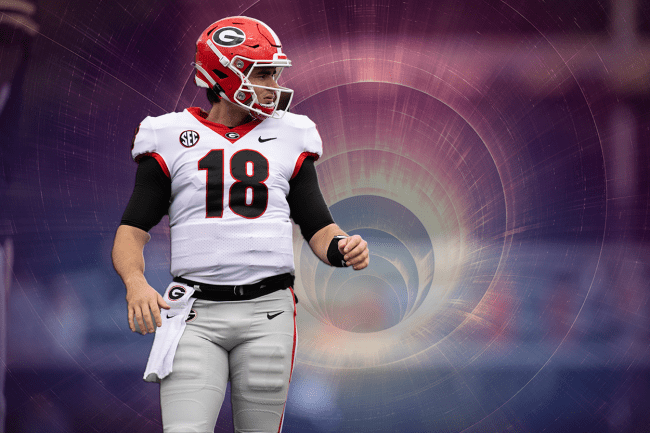 Former five-star recruit J.T. Daniels is set to play for his third school in five years this fall. The 22-year-old will exhaust his final year of eligibility at one of three schools and is hoping to make a definitive NFL Draft push wherever he ends up.

Daniels, who has dealt with consistent, nagging injuries throughout his four-year career at USC and Georgia. He is currently still enrolled in Athens and will transfer to his new program as a graduate student.

As a result, there is not a huge rush to J.T. Daniels’ transfer portal timeline.

However, the goal for Daniels is to enroll at his next school as soon as he gets his degree at Georgia. That will allow him to participate in summer workouts and fall practice before taking the field as the — hopeful — QB1 in the fall.

Daniels’ decision is down to three schools.

He visited Oregon State during spring practice at the beginning of March and took a trip to Missouri for the school’s spring game in the middle of the month. Now he has his third and final visit set for West Virginia.

Daniels will be in Morgantown next weekend and will have the opportunity to reconnect with former USC offensive coordinator Graham Harrell, with whom he saw some success in Los Angeles. It will also allow him to get a feel for the campus, the town, and how the football program operates under head coach Neal Brown.

From there, he will make a decision within a few weeks.

Sources: Georgia transfer quarterback JT Daniels has officially set a visit to West Virginia on the weekend of April 9th. This is his third official visit of the spring, as he’s already been to Missouri and Oregon State. He’ll decide in the next few weeks.

Daniels has also been in contact with LSU, Notre Dame, TCU, Penn State and Florida State, but none of those schools are in the mix. He is down to the three schools that he has visited — Missouri, West Virginia and Oregon State.

All three schools, likely, would offer him the opportunity to start right away. It would be a one-and-done type of situation with the 2023 NFL Draft as the goal.