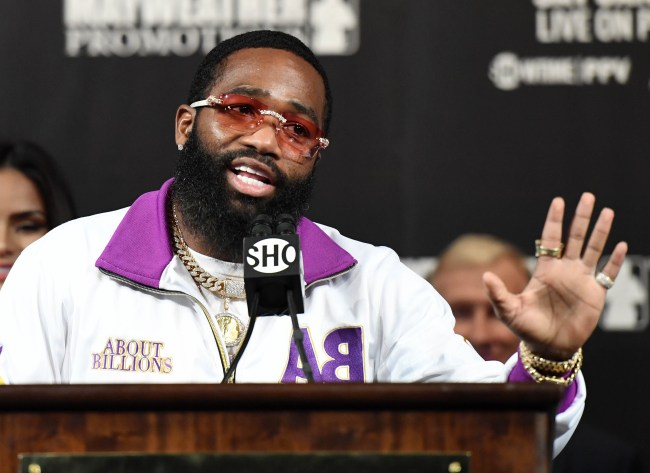 Adrien Broner’s Instagram account apparently got him in trouble with a judge in his civil suit case.

Over the weekend, the famous boxer posted a video on Instagram of wads of cash lying around on a table.

When Broner went to court on Monday he told a judge he couldn’t pay the $800,000 judgment he owed a woman in connection with a 2018 sexual assault at a Cleveland nightclub because he only had $13 dollars to his name.

The judge told Broner she had seen his Instagram video and immediately threw him in jail for contempt of court.

A judge in Cleveland on Monday tossed professional boxer Adrien Broner in jail after holding him in contempt of court as part of a civil lawsuit filed by a woman he assaulted at a nightclub in 2018.

Cuyahoga County Common Pleas Court Judge Nancy Margaret Russo found the 31-year-old Broner failed to cooperate with multiple deadlines she set for him to hand over documents and other evidence showing why he has not been able to pay the more than $800,000 judgment the judge ordered him to pay the woman in December.

Russo cited an Instagram video posted this week showing Broner handling large stacks of money after saying in an Oct. 5 court filing in that he had just over $13 in cash. Russo ordered Broner to remain in jail until he provides complete and truthful information about his finances to the woman’s attorney, Subodh Chandra and the Chandra Law Firm.

Broner tried to claim that he had “rich friends” who sent him money seen in the Instagram video, but the judge wasn’t buying it.

Adrien Broner arrested on unpaid $800k debt
after flashing money on his instagram. Y’all think they should use Instagram in court? pic.twitter.com/LwznWJCzwi