JuJu Smith-Schuster Was Surprised By His Options, Lack Of Multi-Million Dollar Deals During Free Agency 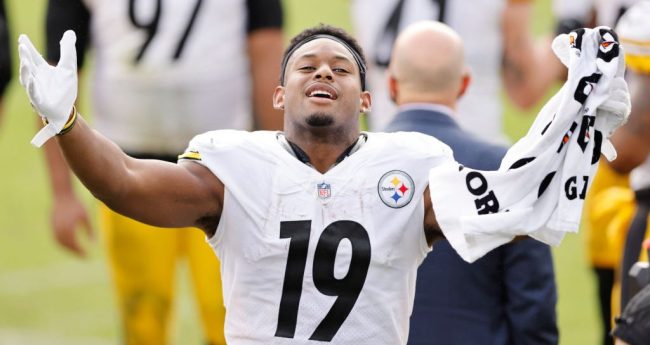 JuJu Smith-Schuster has been at the forefront of a lot of headlines over the past few years. He burst onto the NFL scene as a second-round draft pick and exploded into a 1,000-yard receiver by year two. Playing alongside Antonio Brown, who Smith-Schuster doesn’t believe could have handled sharing the spotlight, he quickly became WR1 in Pittsburgh by year three when AB went off to Oakland.

After Brown’s departure, Smith-Schuster’s production fell off of a cliff in 2019. He barely eclipsed the 500-yard receiving mark. In addition, when he arrived in the league, he was a deep-ball receiving threat on the outside. When Dionte Johnson and Chase Claypool emerged as serious threats around him, Smith-Schuster was moved inside to the slot.

Smith-Schuster entered the final year of his rookie contract in 2020 and saw an increase in targets and yardage. However didn’t pass the 1,000-yard mark for the second-consecutive year. As a result, there was a lot of speculation about his relationship with the Steelers.

Many expected Smith-Schuster to dive head-first into the free agency waters and sign with a team that would allow him to be the No. 1 guy. Even Kansas City Chiefs head coach Andy Reid was sending him pictures of the Lombardi trophy, hoping to lure him in. However, the process didn’t go quite like he had planned.

Smith-Schuster entered free agency thinking he would have options and suitors offering multi-million dollar deals. Instead, it became “more stressful that draft night.”

“I thought I was going to get more multi-million dollar deals than what I actually got,” he said. “Leading up to it, I thought I would have options. But when the cap hit, and it didn’t raise as much as I thought, it took a toll to where I sat back and waited until the last few days of free agency.”

Along the way, Pittsburgh was always in his ear asking what he was doing and wanting to bring him back. Because he had been there for his first four years, Smith-Schuster promised to let them know before signing. However, knowing he likely had a fall-back didn’t help ease the process.

“Within the first four or five days, seeing who gets taken off of the board and who got what [financially] and it was really stressful,” said Smith-Schuster. “You find yourself comparing, but I was comfortable sitting back and waiting.”

When push came to shove, Smith-Schuster trusted in God. Whichever team gave him an opportunity was meant to be. He ultimately decided to take “a massive pay cut” to stay in Pittsburgh and bet on himself with a one-year deal. That means that next year will be another contract year and he needs to prove what he can do.

Additionally, reports have said that Smith-Schuster expects to play outside more this year. Can he return to form?